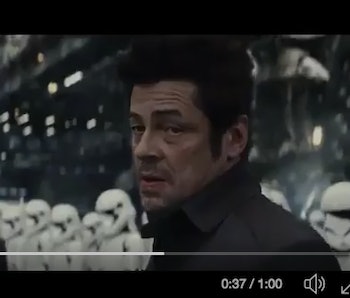 Some truly shady characters have been hiding at the edges of the Star Wars universe. A new Portuguese TV spot for Star Wars: The Last Jedi shows the first footage of Benicio del Toro’s mysterious DJ, a character who has remained shrouded in mystery since rumors of his role first surfaced online. DJ is shown very briefly in the teaser turning around in front of a gathered crowd of Stormtroopers in an alarmingly First Order-looking space, industrial and too big to be comfortable.

Very little is known about DJ other than that he’s a “slicer,” the Star Wars universe’s version of a hacker, and that his allegiances are unclear. Most fans have assumed that DJ will help out Finn and Rose Tico during their mission on Canto Bight, but this new footage of DJ hanging out with the First Order really brings that into question.

Star Wars is, canonically, a very black and white world (often literally), more often than not drawing firm lines between good and evil. The Light and Dark sides of the Force embody these extremes. Since The Last Jedi seems prepared to play with audience’s notions of what makes a hero and a villain like never before in the Star Wars universe, it would make sense to throw a morally ambiguous character such as DJ into the mix.

DJ follows in the wake of swindlers such as Han Solo and Lando Calrissian, both of whom made deals with unsavory characters in the original Star Wars trilogy but both of whom inevitably picked the side of good. Lando got himself intertwined pretty heavily with the Empire in Star Wars: The Empire Strikes Back, but it seems DJ has taken that to a whole new level in The Last Jedi.

The mystery of DJ has spurred Star Wars fans to concoct all kinds of crazy theories, including that he’s Boba Fett’s long-lost son, or maybe Rey’s father, or the ever-popular Ezra Bridger from Star Wars Rebels. No matter who he is, one thing is clear: we won’t know anything concrete about him until he appears onscreen in The Last Jedi.