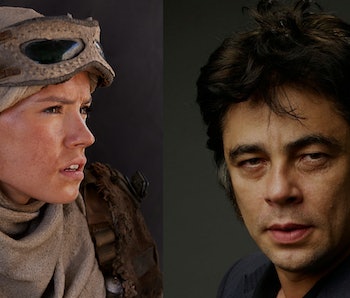 Rey might end up being a bad egg. A new theory about Rey’s parentage in the latest Star Wars trilogy connects her to actor Benicio del Toro’s character in Star Wars: The Last Jedi.

The Last Jedi will see del Toro in an as-yet-unspecified role. Best known for playing bad guys with characteristic flair, del Toro is, according to one Reddit user, a perfect candidate for Rey’s father.

Specifically, del Toro is theorized to be playing Ezra Bridger, a character from Disney XD’s Star Wars: Rebels and, you guessed it, a Jedi in training. Redditor DARTH_HODOR poses that Ezra will fall to the Dark side after joining Luke Skywalker’s Jedi Academy at the end of Rebels (a commonly popular ending amongst fans). He will then manipulate Luke’s other students — including Ben Solo — to the Dark side, but, foreseeing this, Luke hides Ezra’s daughter, Rey, on Jakku.

This specific setup would allow for what the theory calls a “double fall” and an epic showdown in Episode IX: “It sets up Rey’s fall to the Dark side (which could be incredible if pulled off correctly) and Kylo Ren is already poised for a redemption arc of his own (a “fall” to the Light).”

But then where does Rey come from? Does Ezra just magic a baby into the world with the help of the Force a la Shmi Skywalker and Anakin? Probably not.

Sabine Wren, another character on Rebels, has been theorized as being Rey’s mother. Now, there are even more levels to the Sabine theory than the Ezra and Benicio theory, but it’s certainly interesting. Both Ezra and Sabine are (thought to be) Force-sensitive, which would explain why Rey is so incredibly powerful.

More likely than not, though, the secret of Rey’s parentage is far less convoluted (i.e., not including Rebels canon in an attempt to make things a little easier on normal moviegoers), and was already obvious from The Force Awakens like Daisy Ridley (Rey) said.

Hopefully, more will be revealed about del Toro’s character as The Last Jedi’s premiere date approaches and more theories about Rey’s parents can be put to rest.