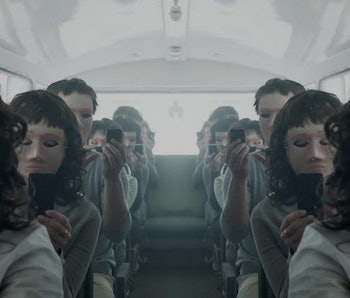 Perhaps the best and most critically acclaimed contemporary science fiction show will keep its fans waiting a little bit longer. Black Mirror Season 4 will not debut on Netflix this year.

On Monday, Netflix released its list of all the new titles coming to the streaming platform in December 2017, as well as everything leaving. In terms of the new arrivals, Black Mirror is nowhere on this list, despite new trailers and buzz which seemed to indicate the show would drop before the end of the year. Also, just because it’s not coming out in December doesn’t mean we can assume it will drop in January 2018, either.

At this point, we don’t actually know exactly when the new batch of episodes will drop. While it seems unlikely that Netflix would want to delay releasing one of its biggest hits, it’s possible they are keeping Black Mirror in reserve because they assume everyone hasn’t finished watching Stranger Things Season 2. Maybe? Or, perhaps they want viewers in a similar demographic focused on the orc cop drama Bright coming out in December.

So what does it all mean? Could Netflix be holding back Black Mirror in order to go head-to-head with Amazon’s Philip K. Dick’s Electric Dreams in January? Amazon’s most recent press release also confirmed that all 10 episodes of Electric Dreams will be available at the same time. Will Netflix do the same with Black Mirror? Or could they change their distribution pattern and dole out the next few episodes of Black Mirror more slowly?

For now, fans will just have to wait and see. Still, because Black Mirror’s Season 4 episode “USS Callister” — a Star Trek spoof — was already screened for critics in October, it seems like an announcement of the full season is coming any day now.