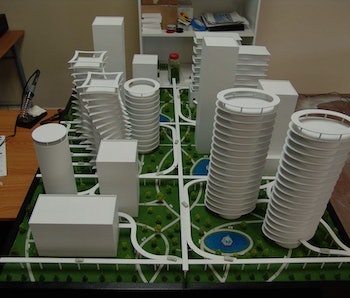 Overland, a Florida-based transportation startup, is not impressed with hyperloop. Elon Musk’s proposal for a vacuum-sealed train system, first outlined in 2013, promises travel at speeds of 700 miles per hour. The system has been criticized as an expensive fantasy, though, and it relies on all new infrastructure.

Overland is different. Specially designed electric vehicles travel along regular roads, before joining “skyways” that latch on and drive the car along a track at speeds of up to 150 miles per hour. A central control system drives cars bumper-to-bumper, meaning it can carry 12 times more traffic than an interstate highway. The skyways also recharge the car, so when it rejoins the regular roads, it’s topped up and ready to go further.

Inverse spoke with Connor James Kapoor, Overland’s director of marketing, to find out more about whether there’s an alternative to hyperloop.

How does Overland work?

The Elevated High-speed Overland Skyway is integrated with the local arterial and street grid. i.e. dual mode. Essentially, you drive your car like normal on the existing roads, and when you are ready for the longer portion of your trip, you “merge” onto the Overland Skyway, which will now control your speed. Think of it like an extra lane on every road that has no speed-limit, no traffic lights and is also elevated 10-20 feet off the ground.

How did you first come up with the idea?

Wally Kissel, our founder, first came up with the idea when he noticed the massive amount of vehicular deaths that occur each and every year. Slowly, Wally worked on an idea of an elevated skyway that could allow vehicles to move at increased speeds and improve highway safety tenfold. Slowly Overland ATS has changed and grown and become what it is today, the perfect compromise between existing and future technology.

How does it compare to the vacuum-sealed tubes found in the Hyperloop One project?

Hyperloop’s elevated structures are inherently more complicated, since they are reliant on the tube system. Their tubes also require constant maintenance, upkeep and spot checking, because leaks in the tube can be potentially deadly to hyperloop passengers. Also they do not seamlessly coexist with our existing road systems, because the only place to get on and off the hyperloop system is at a “station” whereas each vehicle on the Overland system would be autonomous and have “no strings attached,” therefore cutting back on infrastructure costs and allowing us to utilize our existing roadways.

How does it differ from Arrivo’s idea to use magnetically levitating pods along tracks at 200mph?

We do not use Mag-Lev. Our main selling point is our inter-modal design that allows normal road vehicle usage on top of Overland Skyway Usage, maglev designs are also very neat and efficient, however they are inherently more dangerous considering slowing down 200mph of frictionless mass.

How much would it cost to fit out a standard city with these?

While I don’t have a “per city” estimate, we estimate complete construction costs around $5 million a mile, The average 2-lane highway costs around $2.2 million a mile. While it is more expensive, Overland’s vehicle capacity per hour is much higher, and could charge around 70 cents a mile and quickly see a solid revenue stream/return on investment.

Would this work for inter-city travel or is it more for a metro region?

Yes we are mainly focusing on inner city travel, and eventually it could be worked into arterial street grids.

Can any car run along these tracks? How does it account for different wheel spans?

No, vehicles will have to be Overland-specific in order to run on the Overland Skyway.

When can we expect to see this system hit the roads?

Right now we are working on building media attention in order to attract investors to build a full scale proof of concept in South Orange County, Florida.

Do you think your system could co-exist with Hyperloop, or is the latter dead in the water?

Our concerns with hyperloop still remain, it’s much more costly to build and doesn’t have any inter-modal features that make it special.

Hyperloop One is closer than ever to reaching 700 mph.

More like this
Mind and Body
Feb. 5, 2023
Depression Meals: These 4 Easy Dinner Options Are Backed by Science
By Sarah Sloat
Science
Feb. 5, 2023
The Plague Is Still Here — And It Could Infect Your Cat
By Tara Yarlagadda
Gaming
23 hours ago
Super Dodge Ball is a Delightful Hidden Gem on Nintendo Switch Online
By David Grossman
LEARN SOMETHING NEW EVERY DAY.
Related Tags
Share: