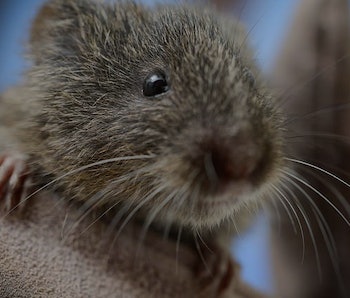 If you had to date a rodent, you’d want to choose a vole. With their furry little dad bods, voles are part of the small group of animals that form lifelong, monogamous relationships. Unfortunately for them, their human-like mating habits mean they’re a favorite model for scientists researching human behavior.

The latest study on the tiny mammals, however, turned their reputations upside down: In an article, published in Frontiers in Psychiatry on Friday, scientists show that getting voles drunk turns them into bad boyfriends.

The Oregon Health and Science University scientists behind the study discovered that alcohol changes a specific brain region in male voles that, in turn, causes the vole’s long-term relationships to suffer. A similar process may happen in the brains of drunk humans, the researchers write, and understanding it may eventually help them discover ways to combat the “devastating effects” alcohol can have on social relationships.

“Our results in prairie voles have identified a biological mechanism that could explain the link between discordant drinking and relationship breakdown, but we will need to do further work to confirm this for humans,” co-author Andre Walcott, a Ph.D. candidate, explained in a statement.

“In future studies, we might be able to find strategies to overcome the negative effects of alcohol, to improve relationships that are disrupted by problematic drinking.”

While it’s known that alcohol abuse is linked to negative relationships, scientists are still unsure whether alcohol directly contributes to the breakdown of the relationship or whether the bad relationships cause individuals to drink. To study this, the researchers allowed male and female prairie voles to pair-bond and form a relationship for one week. Then, the male voles were given a 10 percent alcohol solution, while the female voles were split into two groups — one that also received alcohol, and another that received only water. For the next week, the voles drank; some couples both drank, sharing the same bottle of alcohol, while other couples involved the male boozing while his female partner stayed sober in a separate room.

Then, the scientists, much like that friend of your boyfriend who you don’t like him hanging out with, offered all the male voles two choices: Go hang with their girlfriends, or go out and meet a new lady vole.

In this situation, the alcohol-drinking males with sober partners spent less time with their original partner and showed changes in a brain region called the “periaqueductal grey.” This part of the brain is the primary control center for descending pain modulation, and the scientists theorize it might be responsible for the change in the vole’s behavior.

The same could not be said for the voles who boozed with their partners and the voles who stayed sober together. These voles chose to huddle with their original partner, even in the face of temptation. This, the scientists point out, mirrors human behavior — and anyone who’s seen a couple make out in a club can attest to this statement. Overall, separation rates increased when one vole in a partnership drank, and separation rates didn’t change when both voles were on the same page.