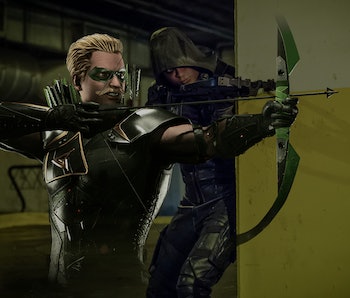 There is a lot of important stuff that went down in this week’s episode of Arrow, from Deathstroke’s loss to John Diggle coming clean about his tremors. But the most important, WTF-worthy question one has to ask is: How the hell are William and Felicity playing Injustice 2?

Obvious Warner Bros. tie-in promotion aside, this is tricky because of what’s actually seen on screen. In Arrow, Felicity and William play with Sub-Zero and Blue Beetle, in Gorilla Grodd’s jungle habitat. That is just enough avoiding serious continuity problems that would otherwise present itself by having Injustice 2 in the Arrowverse. Still, it’s weird that this video game about DC comics exists in a TV show set in the world of DC Comics.

Also, in the original game Injustice: Gods Among Us from 2013, Amell voiced an Arrow-themed skin for the Green Arrow. So, in effect, William is playing a sequel to a game that had included his father.

Are they really worried about people finding out Oliver Queen is the Green Arrow? I mean, really.

There’s actually important stuff that happened in Arrow, too. Deathstroke discovers he has another son, Grant, who in the comics is the Teen Titans villain Ravager and inspires Deathstroke to continue searching the world. Diggle comes clean about his problems after their villain-of-the-week, Dragon, was Diggle’s drug supplier. And Dinah (Juliana Harkavy), whose former lover is the anti-hero Vigilante, is now the one keeping secrets. Also, Slade’s time between the flashbacks of Season 2 and his return to Star City was finally revealed, as Slade suffered from hallucinations of Shado (Celina Jade, making a surprise cameo), the woman who drove a wedge between Oliver and Slade.

“Promises Kept” is a solid episode of Arrow that finally propels Season 6 into going places, but the fact Felicity and William are breaking the fourth wall is just enough of a distraction to make everything else seem less crazy.

Arrow premieres Thursday nights at 9 p.m. Eastern on The CW.