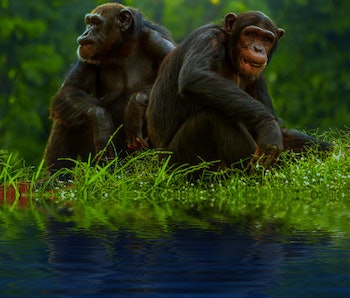 Say you spot someone you really like — someone you’ve really been bonding with. The feeling seems reciprocal, until you spot your beau sitting closely with someone else. You wonder furiously: who even is that? But seeing the stranger delicately fondle your beloved’s hair is the last straw. Oh hell no! You finally intervene, throwing yourself headfirst into the situation.

This could easily be a scene from any human’s life, but, as a Royal Society Open Science paper published on Wednesday points out, it could also very well be a glimpse into a chimp’s.

In the paper, scientists from the Max Planck Institute for Evolutionary Anthropology that observed western chimpanzees and sooty mangabeys in Côte d’Ivoire’s Taï National Park for two years report that the animals get possessive about their complex, long-lasting relationships, taking active steps to prevent a new alliance from forming. What really seems to send them into a jealous rage, they point out, is when their close relations start grooming one another.

The scientists say it’s too soon to classify this behavior as “jealousy” per se, but it certainly resembles the actions of jealous humans. They observed that, in chimp and monkey society, grooming is like VIP access to the hottest friendship club, opening doors for those who get an invite and ruining the social lives of those who get no invitation.

The researchers came to this conclusion after observing how dominance rankings and social relationships play a role in grooming and grooming interventions. Grooming has already been known to play a vital role in shaping social relationships among most animals, not just chimpanzees and monkeys. What wasn’t clear before this study is what happens when grooming is purposefully interrupted and what advantage that gives to the interrupter.

In observations of both species, it was obvious that bystander animals —those not being groomed — tended to intervene when they had a strong affiliative relationship with one or both of the animals being groomed, but only if there was something to be gained by doing so, like getting a bump up in social status. This seemed to be especially true when the individual doing the grooming was a close-ranked competitor and the individual getting groomed was a close friend. This new alliance would severely undercut the bystander’s social status, so it makes sense that intervention would ensue.

“We found that in both species, bystanders are often very specific in their interventions, targeting grooming interactions of their friends, of individuals that are close to them in rank and groom someone high-ranking, and of dyads [pairs] that do not yet have a strong relationship with each other,” explained co-author Alexander Mielke, Ph.D., said in a statement.

For monkeys and chimps, grooming doesn’t just mean parasite removal — it also results in social rewards. Pairs that groom have more access to mates and meals, and their infants are better protected. These are valuable returns, which is why the animals carefully protect their access to these grooming relationships — even if it involves causing drama in their social circles and dealing with the hot mess that ensues.

If you liked this article, check out this video on how your brain tricks you into making friends.

More like this
Science
Jan. 29, 2023
Are coyotes dangerous to dogs and cats? Here’s how to keep your pets safe
By Tara Yarlagadda
Science
Feb. 5, 2023
The Plague Is Still Here — And It Could Infect Your Cat
By Tara Yarlagadda
Science
Feb. 1, 2023
Look! Five New Snake Species Discovered in a Habitat Devastated by Mining
By Robin Bea
LEARN SOMETHING NEW EVERY DAY.
Related Tags
Share: