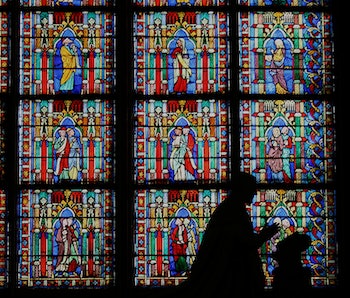 Every year, thousands of Catholic pilgrims trek for 30 days along the long, dusty Camino de Santiago de Compostela in northern Spain — the “Way of Saint James” — hoping to pay their respects at the burial place of the beloved saint. Irreligious folks might scoff at the hordes, dismissing them as childish and irrational for believing in the Church’s old tales, but research on these pilgrims published Wednesday in Scientific Reports suggests it’s wrong to jump to those conclusions.

In the study, scientists from Coventry University and the University of Oxford show that having religious beliefs has nothing to do with how rationally a person thinks, or how much they prefer to trust their gut instincts. Their findings contradict research trends over the past 20 years, which suggested that people with strong religious beliefs naturally think less analytically and more intuitively, supporting broad stereotypes that religious people think irrationally and that people are born believers.

The new research, which involved the UK scientists actually going out to northern Spain and conducting experiments on 89 pilgrims along the Camino de Santiago, shows that the levels of rational thought in religious people aren’t unusual at all. So, the researchers conclude, fervent religiousness must come down to other, non-cognitive factors.

“Religious belief is most likely rooted in culture rather than in some primitive gut intuition,” said lead author Miguel Farias, Ph.D., in a statement

The researchers set out to test whether there was actually a relationship between the way people think and their belief in the “supernatural” along the Camino de Santiago. On the path, the team first asked pilgrims about the strength of their “supernatural” beliefs then had them play a game designed to measure a person’s tendency to think intuitively (making decisions based on a “gut feeling”) or rationally. Their observations suggested there was no link between the two, and furthermore, there was no relationship between the amount of time a person had been on pilgrimage and their level of intuitive thinking. Older theories would have suggested that, a person who had been on pilgrimage for a long time would have naturally spent more time engaging with supernatural ideas, leading them to think more intuitively (rather than rationally), but the team’s observations suggest that simply isn’t the case.

The follow-up experiment was designed to test whether the pilgrims’ faith could be decreased by decreasing their intuitive thinking. The researchers had the pilgrims do an extremely rational exercise — solving math puzzles — then tested their belief in the supernatural. Still, there was no relationship between the two.

All of their observations point to the fact that there’s no relationship between a person’s belief in the supernatural and the way their brains are wired to think. This is not to say that there is not something different about people who are religious — it just points out that the difference may not lie in their cognitive processes.

Most likely, the researchers write, it’s a person’s upbringing, together with the social and cultural environment they were raised in, that ultimately influences their belief in the supernatural. While it seems unlikely that humans are naturally wired to seek out gods, it remains unclear whether human societies could have formed and thrived without collectively believing in a higher power — and whether we’ll still need religion in the near future.