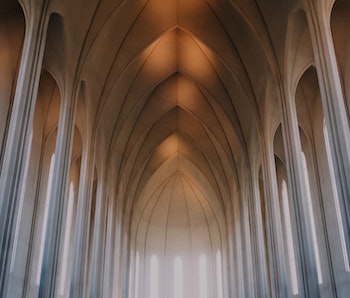 When we take in public debates like the one between Bill Nye the Science Guy and creationist Ken Ham, it’s easy to think the religious and the scientifically minded are locked in battle.

But new polling demonstrates this isn’t necessarily true — at least for people who are religious.

Today, the Pew Research Center published compelling evidence that people who are not religious see a greater rift between religion and science than church-goers do.

In a poll of 2,000 U.S. adults, Pew found that 76 percent of adults who have no religious affiliation believe that religion and science are incompatible. Half of religious people, however, believe that the two entities are often not in conflict.

These statistics are taken from the general opinion of those polled, that, when ignoring religious affiliation, reveals 59 percent of Americans say science and religion are often in conflict. Adults who think their religious beliefs conflict with scientific teachings has declined in recent years.

There are two plausible ways to make sense of this finding, explains Tania Lombrozo, a professor of psychology at the University of California, Berkeley, to Inverse. One is that people who sense a conflict tend to strongly pick a side — they either see science, which is rooted in the idea that things can always change, as fundamentally incompatible with religion; or religion, which is based on faith and laws within a text, as fundamentally incompatible with science.

“But a second possibility is that people had different ideas about what’s meant by ‘religion,’” says Lombrozo to Inverse. “For the nonreligious, the question could evoke forms of religion that receive a great deal of attention [like forms of Christianity that are committed to a literal interpretation of the Bible], even if they aren’t the most prevalent. But many religious respondents are likely to endorse forms of religion that don’t involve such explicit conflicts with science. For those respondents, reconciliation between science and religion might not only seem possible, but actually characterize their current beliefs.”

For the three in 10 Americans who believe their religion conflicts with science, the creation of the universe and evolution were most often the crux of their concerns. But not all religious people had an issue with evolution — 71 percent of white mainline Protestants, 59 percent of Hispanic Catholics, and 73 percent of white Catholics believe that humans and other living things have evolved over time.

It particularly makes sense for Catholics to feel reconciliation with evolution. Pope Francis has been outspoken in his belief that evolution is not incompatible with Catholicism, saying this in October:

“The Big-Bang that is placed today at the origin of the world, does not contradict the divine intervention, but exacts it. The evolution in nature is not opposed to the notion of the Creation, because evolution presupposes the creation of beings that evolve.”

In comparison, 86 percent of religiously unaffiliated Americans believe in evolution.

A debated issue within religious communities is whether places of worship should express their views on science and policy decisions, and the poll found that half of adults think they should. However, when you look specifically at people who are not religious, 66 percent say that places of worship have no business commenting on scientific policy.

Those who want religious leaders to stay quiet on science don’t necessarily need to worry — at least when it comes to discussing climate change. According to a 2014 report by the Public Religion Research Institute about six in 10 Americans say their clergy rarely or never talk about it.

Climate change is actually a scientific topic where people’s religious beliefs do not play a central role in determining their opinion, according to Pew. Other scientific topics that are not affected by religion include the appropriateness of using bioengineered artificial organs for human transplant, space exploration, and the long term payoffs from the government investing in science.

Researchers believe that people who are able to reconcile science with religion are able to do so by allowing for multiple levels of causality into their beliefs — when it comes to things like the Big Bang, religion explains the why and science explains the how.

Pew’s new poll demonstrates that nonreligious people are more in the camp of sorry but this is just how it is. This, the authors behind the poll say, suggests that the perception of conflict isn’t so much rooted in their own minds, but in assumptions about other people’s beliefs.

More like this
Science
6.22.2022 8:26 PM
Yes, there are mites living on your face — and they can poop, a new study finds
By Allison Parshall
Entertainment
6.27.2022 11:30 AM
You need to watch the scariest movie of the 20th century before it leaves Netflix this week
By Eric Francisco
Culture
18 hours ago
8 sensational sci-fi shows and movies coming to HBO Max in July 2022
By Robin Bea
Share: