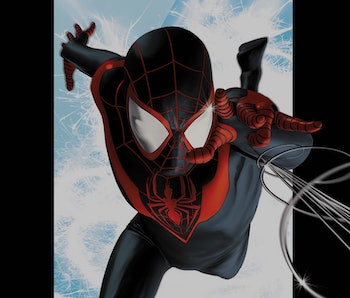 It’s rare today to see exclusive comic book talent jump ship to a rival company. But, that’s what happened on Tuesday when DC Comics announced on Twitter that it has signed an exclusive deal with Brian Michael Bendis, a longtime and highly influential Marvel writer. While DC is clearly benefitting by snagging Bendis and his creative talents, the move could also be good for Marvel as well, which could use fresh voices behind some of Bendis’s biggest characters.

DC Comics announced the “multi-year, multi-faceted deal” in an image shared on Twitter at 9 a.m. Eastern, while Bendis shook fans by confirming the news on his own Twitter. “This is real,” he said. “I love you all. Change is good. Change is healthy. I am bursting with ideas and inspirations. Details to come! Stay tuned!”

Since 2000, Bendis has been pretty much exclusive to Marvel, where he built his career with blockbuster titles such as Ultimate Spider-Man, various X-Men books, and Alias, the chief inspiration for the Jessica Jones series on Netflix. Bendis has written outside Marvel before — he wrote a Batman story in Batman Chronicles in 2000, and his Image Comics series Powers was adapted into a TV show for PlayStation — but for the most part, he’s been strongly associated with Marvel for the better part of the last 20 years.

Bendis’s skill is unquestionable, which is how DC stands to benefit, but Marvel will also get a little more interesting in the wake of Bendis’s departure. Creatively speaking, some of Bendis’s characters, including Jessica Jones, Miles Morales and the new female Iron Man, Riri Williams, have plateaued, and could use a new voice behind them. His departure also opens the door for an author who isn’t a middle-aged white man to write some of Marvel’s mega-popular characters who represent gender and ethnic diversity. Though Bendis created and defined many of those characters, they can only be further enriched by newer, fresher talents who understand the complexities of these characters’ identities outside of their superpowers.

“Brian is a great partner and has contributed incredible stories and characters to the Marvel Universe over the years,” Marvel said in a statement to Inverse. “We appreciate his creativity and professionalism, and we wish him the best on his future projects.”

It is currently unknown what comics Brian Michael Bendis will write for DC.

More like this
Culture
6.29.2022 10:00 AM
6 years ago, Marvel released its most incoherent sequel ever
By Graeme McMillan
Entertainment
6.29.2022 4:01 PM
Harley Quinn Season 3 could fix a major Batman controversy, trailer hints
By Eric Francisco
Entertainment
6.24.2022 11:15 AM
Behind the scenes at “Herogasm,” The Boys’ most NSFW episode ever
By Aaron Pruner and Jake Kleinman
Share: