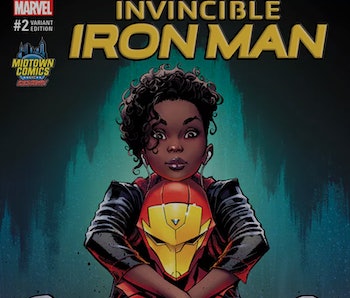 Veteran comics writer Brian Michael Bendis is sick of the internet’s shit. As the original writer on Miles Morales’s Spider-Man series, and the current writer of 2016’s Invincible Iron Man, which puts young, black Riri Williams’ in the Stark Industry armor, Bendis has suffered repeated nausea from exposure to the stinking underbelly of pop culture. “I’ve learned that when you’re working in a shared universe, it’s impossible to make everyone happy,” Bendis told Inverse. “You just can’t do it.”

In order to endure what hundreds of online readers hurl at him, Bendis says he keeps his eye on his character and nothing more. That strategy was relevant when Bendis began writing the young, black and hispanic Spider-Man series, and it remains relevant now. “I’m not worried about anyone other than Riri, and I try to write her as honestly as possible,” he said. “Marvel fans would rather have you try earnestly and fall on your ass than try the same things over and over.”

Bendis has received backlash from both conservative and liberal readers. Miles’s mere existence angered racist Marvel fans, but a liberal outcry met Bendis and his team when Miles said, in a controversial panel, that he didn’t want to be “Black Spider-Man,” and thought his ethnicity shouldn’t matter to the people he protected. The whole cycle repeated itself when some Marvel fans reacted with rage when the publisher announced that Riri would take Iron Man’s place in the comics; then, others criticized Marvel for hiring Bendis, a white man, yet again, to write a Black teenage hero’s story.

“It’s a big deal when a young African American character makes her debut. Everyone wants it to be the right thing,” Bendis says, remembering that Glenn Beck “went nuts on his show” when Miles Morales was announced. “There was all kinds of craziness Marvel and I had never experienced before.”

Bendis prepared to write Riri’s story by focusing on her immense intellect, studying texts on children with exceptional IQs and the challenges they sometimes face. “I spend a lot of time alone with myself, and that can be a happy place for people working out issues in their own work,” he explained. “It’s similar, I think, inventors like Riri and writers. People creating anything have a futurist quality to their thought processes. You can imagine Riri sitting alone in her garage for weeks and not engaging with the world.”

Invincible Iron Man #1 drives home this point, hard, opening with a scene in Riri’s principal’s office, in which the principal of her public school tells the Williams family that their daughter is in danger of folding into her own brain. She’s not a genius, the comic says, but a “super genius,” and as she grows into a young woman, she’ll need to be reminded that the world is a beautiful place worth exploring.

Riri shares that alienating, polarizing intellect with Tony Stark, who advises her throughout her solo comic via a personalized A.I. system Stark set up in the event of his death. We don’t see Starkbot speak too much in Issue #1 — he only appears in the final panels — but Bendis says there may be friction between the old Iron Man and Ironheart, the name she will eventually take on. “I wanted to see how Tony might react to a young woman blowing the doors off the place and breezing by him,” he admits.

Though both characters are exceptionally intelligent, hyper-competent scientists, Stark just can’t understand Riri’s background fully. We get a glimpse into the character of Riri’s past, when her best friend and step-father are shot in what appears to be a drive-by. When asked whether the shooting is gang-related, or motivated by a supervillain, Bendis says simply, “It’s not clear if its ‘gang related’ or just ‘troubled streets’ violence. And that was on purpose. The randomness of it is what haunts Riri the most going forward.”

Part of what motivates Riri will be her experience with this random act of cruelty. Stark, in most of his stories, doesn’t really grapple with violence of that sort until adulthood — though the MCU introduced in Captain America: The Winter Soldier that Stark’s parents were murdered by HYDRA when he was a boy. Riri, unlike Stark, isn’t a stranger to violence when she begins her life as a vigilante.

When discussing the turbulence that marks Riri’s early life, Bendis returns several times to the subject of internet harassment. He’s keenly aware that his book is debuting in the same year that another Marvel writer, Chelsea Cain, was chased off Twitter by trolls unhappy with her feminist-themed Mockingbird cover, and he believes the actions of so-called “fans” expose who they really are. “Captain America would never, ever go online and harass someone for having an opinion,” Bendis says, sounding exasperated. “So what exactly are you supposed to be a fan of?”