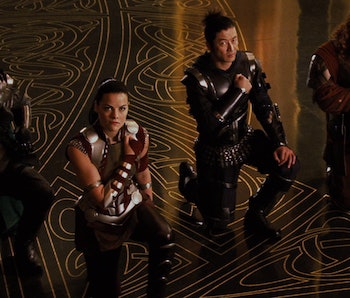 Before Thor became a superstar Avenger, he was just the spoiled prince of Asgard with four loyal friends. Unfortunately, the otherwise fantastic Thor: Ragnarok did little to give Thor’s closest friends a proper send-off. Here’s what happened to Lady Sif and the Warriors Three in the lastest Marvel epic.

In Norse mythology, Ragnarok is the Viking apocalypse. Basically a series of natural disasters and large-scale warfare, the whole thing is a gigantic reset button for Earth, in which all the land and people are leveled to begin anew. That’s not quite what happens in Marvel’s Thor: Ragnarok, but it was still pretty apocalyptic for three Asgardians in particular, the Warriors Three.

Practically speaking, these three Asgardians — all of whom are palette-swap variations on the adjective “tough” — were swept aside in favor for more distinct personalities, Valkyrie (Tessa Thompson) and Hulk (Mark Ruffalo). With those two, there was greater potential for comedy and story than the trio, whom regular people can’t even identify by name. Their deaths were necessary to make Thor: Ragnarok the big, explosive movie that can earn a $122.7 million opening weekend, and it worked.

But it’s the casual, who-gives-a-damn way they were killed that feels out of place, especially in a continuity where everything is supposed to matter. That the fourth in Thor’s posse, Lady Sif (Jamie Alexander), is not even mentioned is a glaring sore spot in a movie meant to cap off a trilogy. A trilogy!

It’s like if Leia went missing in between Empire Strikes Back and Return of the Jedi, and no one asked why. Or that R2D2 and C-3PO were killed at Jabba’s palace, and no one mourned them. That the Thor trilogy has gotten away with literal murder isn’t just odd, it’s unfulfilling.

Although the dozens of films in the Marvel Universe has made it difficult to see clearly, most of the self-contained “trilogies” still follow traditional narrative character arcs. Trace just the protagonists, and you’ll see that Captain America evolves from a loyal patriot (Captain America: The First Avenger) into a disillusioned rogue (Captain America: Civil War). Tony Stark, who kickstarted the MCU, grows from over-confident, Ayn Rand capitalist fantasy (Iron Man) to a compromised futurist (Iron Man 3) whose outlook could almost be coded as socialist. (It’s important to point out Stark’s journey is expanded upon outside his movies, in Avengers: Age of Ultron and Civil War.)

This only partially rings true for Thor. The three films certainly get Thor’s growth as a character right: In Thor, the God of Thunder is a brutish, overly-confident narcissist who hammers first, asks questions maybe never. By Thor: Ragnarok, Thor is only overly-confident because other people — the Avengers, Asgard, all of Earth — depend on him. By the end, Thor is truly “worthy,” not only to wield a sweet hammer, but to rule as King of Asgard. It’s no accident that Thor’s introduction in the first movie and his ascent to the throne in the third are near mirror images.

But what’s missing in Ragnarok are the people whom Thor started his journey with. Again, no one can actually tell any of the Warriors Three apart from the other without checking Wikipedia, and that’s a fault chalked up to either 1) our low attention spans or 2) the first two Thor films being varying degrees of “Okay.” Thor: The Dark World is especially guilty, which took for granted what these characters are supposed to mean and could have meant by Ragnarok.

Imagine a Ragnarok where Fandral, Hogun, Volstagg, and Lady Sif (who wasn’t even seen getting killed so who knows if she’s alive) got to team with the Hulk and Valkyrie. Imagine if they got to play some actual role in fighting Hela, in one last hurrah before Thor gets his ass beat by Thanos. If Thor’s arc in the Marvel Cinematic Universe is that he’s a self-centered prince who becomes a selfless king, learning how to contribute as part of something bigger than himself could only have begun with his leadership over the Warriors Three.