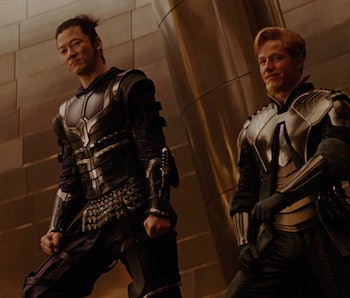 Plenty of familiar MCU faces have shown up in trailers for Thor: Ragnarok, but the legendary Warriors Three and Lady Sif appear to be absent. Will Thor’s war buddies be by his side when the God of Thunder faces off with Hela? While the filmmakers are evading answering that question definitively, producer Brad Winderbaum has confirmed that fans will at least know what happened to them.

CinemaBlend is reporting that regardless whether or not Thor: Ragnarok will feature Sif (Jamie Alexander), Fandral (Zachary Levi), Hogun (Tadanobu Asano), and Volstagg (Ray Stevenson), the film will at least address where they are. “That’s not necessarily the case,” Winderbaum said when asked if the Warriors Three and Sif aren’t in the film. He then replied “yes” when asked if Ragnarok will reveal their whereabouts.

Although they were key characters in the comics, Thor’s closest comrades haven’t had a significant presence in the Marvel Cinematic Universe. While all of them had major supporting roles in 2011’s Thor, their screen time was significantly reduced in 2013’s Thor: The Dark World. Now, based on the trailers and promotional material, they seem practically absent from the film entirely. But Marvel fans always know when something’s up, which is fueling queries.

For what it’s worth, almost all of them — except Zachary Levi — have had traces of evidence that indicates they’ll be in Ragnarok. Both Stevenson and Asano were spotted in Australia at the exact same time Thor: Ragnarok was being filmed, and Jamie Alexander was recently credited for the film during an appearance on Talking with Chris Hardwick.