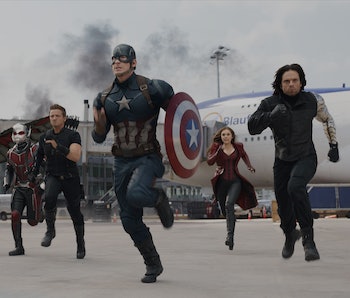 In a conversation with Cinema Blend, Feige said that “other than knowing we’re going to work with Sony on another Spider-Man film,” plus James Gunn’s third Guardians of the Galaxy, “it’s all about Phase Three” for Marvel at the moment.

This isn’t to say that Marvel and Disney will call it quits on its movies and TV shows, because why on Earth would they? But this era of the Marvel Cinematic Universe that started in 2008 with Iron Man — and compelled other big Hollywood studios to imitate Marvel — may look nothing like whatever happens after “Phase Three,” the last leg of Marvel’s three-stage strategy. Phase Three began last year with Captain America: Civil War and will culminate after the fourth Avengers film. Will the next era be Phase Four? Feige admitted, “I don’t even know if it will be called Phase Four.” It seems Marvel fans could look forward to a truly new era. Maybe fans will finally get a Black Widow movie.

More like this
Entertainment
8.2.2022 12:00 PM
Marvel could be hiding an extra Avengers movie in its Phase 6 timeline
By Alex Welch
Entertainment
8.1.2022 4:46 PM
Why is Andor delayed? A surprising Marvel leak could reveal the answer
By Dais Johnston
Entertainment
8.10.2022 10:30 AM
Marvel is torturing VFX artists, but the solution is obvious
By Eric Francisco
Related Tags
Share: