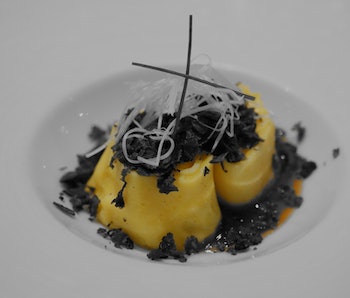 If you want to enjoy the pungent, funky flavor of black truffles, be prepared to shell out some big bucks. This rich, earthy fungus can easily cost as much as $1,000 per pound, making it one of the most expensive ingredients in the world — second only to its cousin, the white truffle, which can be twice the price. This premium price is due largely to the fact that truffles grow wild in a very small number of places around the world, and their productivity can vary hugely from year to year. But black truffle prices may go down soon, as climate change has expanded their range significantly, a new paper suggests.

In the study, published in the journal Climate Research on Sunday, researchers from the University of Cambridge and Mycorrhizal Systems Ltd report that they’ve successfully cultivated Périgord black truffles (Tuber melanosporum) in Monmouthshire, South Wales — the farthest north they’ve ever been grown.

In March 2017, nine years after inoculating the roots of a Mediterranean oak tree with the spores from the finicky fungus, the researchers and their local farmer partners harvested the valuable morsels — with the help of a specially trained truffle-sniffing dog named Bella. Microscopic and genetic analysis confirmed that the truffle pupper had indeed identified the desired variety.

Truffles grow in well-drained, high-calcium soil, in warm climates with rainy summers. As such, truffles make their home in the Mediterranean climate of Italy, and, to a lesser extent, Croatia and France. Truffles are mycorrhizal fungi, which means they live in a symbiotic relationship with plants. Specifically, truffles spread their mycelium fibers through the soil and embed them into the roots of oak trees. They exist in a mutualistic relationship with the trees, benefiting from the trees’ nutrient uptake while effectively increasing the reach of the trees’ roots. There’s one huge difference between truffles and mushrooms, their more pedestrian cousins: While mushrooms’ fruiting bodies poke up through the soil for easy foraging, truffles fruit entirely underground. Hence, pigs and dogs have to be trained to root around the base of oak trees to find the valuable morsels.

Because of their unique growing habits, truffles have been particularly resistant to cultivation. This means that, even in an era of industrialized farming, the only way to get truffles is to have a dog sniff them up. Their wild habits, in addition to their desirable culinary traits, conspire to make these fungi exceedingly pricey.

And as if that wasn’t enough, long-term droughts in Italy and other truffle locales have slowly driven up prices, even as occasional rainy summers have temporarily brought prices down with abundant harvests. This latest development suggests that truffle prices could be driven down by farmers finding ways to cultivate the fungus, especially as the effects of climate change make its natural habitat less hospitable and northern regions more suitable to its growth.

“It’s a risky investment for farmers — even though humans have been eating truffles for centuries, we know remarkably little about how they grow and how they interact with their host trees,” said paper co-author Professor Ulf Büntgen of Cambridge’s Department of Geography in a statement. “Since the system is underground, we can’t see how truffles are affected by different environmental conditions, or even when the best time to water them is. There’s been no science behind it until now, so progress is slow.”

For most people, it doesn’t matter at all that farmers can grow truffles farther north than before. Truffles aren’t a staple crop like rice, wheat, or soybeans, so changes in truffle prices won’t affect the food you buy on a regular basis. But there could be some positive benefits that reach beyond the ultra-wealthy.

For young foodies, truffle cultivation could be a culinary boon. As a new generation dips its toes into the waters of high-end world cuisine, the increased availability of truffles could make this unique flavor more affordable for people who may have otherwise never been able to treat themselves to it. And that is actually really cool. Of course, it’s all because of climate change, so it’s a minimal silver lining in an otherwise awful global climate crisis. But hey, now you can munch on some affordable black truffles while the world ends!