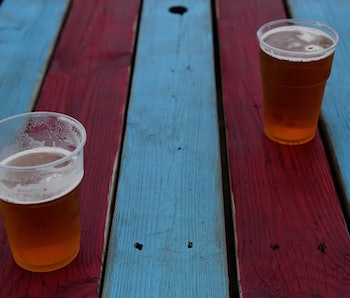 Bad news for partying teens: the old stereotype of the apathetic stoner teen who is failing every class in high school isn’t just a joke anymore, it’s actually supported by science.

Researchers at the University of Connecticut presented their study at the American Public Health Association 2017 Annual Meeting, authored by Elizabeth Harari. They found that teens who are dependent on marijuana and alcohol “achieved lower levels of education, were less likely to be employed full time, were less likely to get married and had lower social economic potential,” the study says.

The emphasis here is on the word dependent. The researchers looked at chronic drug and alcohol abuse, not occasional recreational use. They used several indicators to assess success: education, work history, marriage, and financial solvency. They studied 1,1165 teens from age 12 to between 24 and 35 years old, and checked in with them every two years. And they found exactly what you’d expect — the subjects who were dependent on either alcohol or marijuana generally scored lower on all indicators. Boys and men experience more profound effects of dependence than girls, too, and the scientists are currently pursuing and answer to that question.

“This study found that chronic marijuana use in adolescence was negatively associated with achieving important developmental milestones in young adulthood,” explained Hariri. “Awareness of marijuana’s potentially deleterious effects will be important moving forward, given the current move in the US toward marijuana legalization for medicinal and possibly recreational use.”

Of course, it’s worth noting that beyond the drugs, a variety of life factors could contribute to lower levels of life success. Things like growing up in poverty, unstable households, or mental disorders are all risk factors teens as they enter adulthood. It’s important to caution against assigning sole blame to drugs for turning teens into unmotivated adults who will die alone. After all, practically an entire generation of millennials can’t find a job or a date.

More like this
Mind and Body
Jan. 24, 2023
Is alcohol bad for your health? Here's what the science actually says
By Katie MacBride
Science
Jan. 23, 2023
Earth's inner core may have stopped spinning — study
By Jon Kelvey
Science
Jan. 24, 2023
“Rubble pile” asteroids may be surprisingly hard to destroy — study
By Doris Elín Urrutia
LEARN SOMETHING NEW EVERY DAY.
Related Tags
Share: