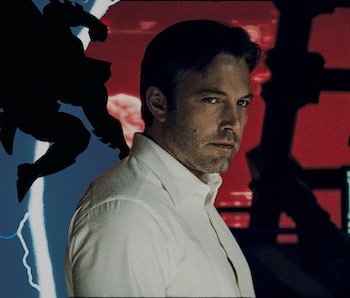 It’s no secret that the Batman of the DC cinematic universe is heavily inspired by Frank Miller’s mega-influential graphic novel The Dark Knight Returns. But fans on Reddit believe they’ve spotted a seriously subtle Easter egg, in the form of a plain brown leather jacket that Bruce Wayne wears across the multiverse.

On Reddit’s r/DC_Cinematic forum, where fans of DC primarily discuss the DC movie universe, a user by the name Leeon1994 posted a photo (lifted from another fan on Instagram, @vigilante_dceu). In it, an image of Bruce Wayne from the 2012 animated film The Dark Knight Returns, a direct adaptation of Miller’s novel, and the new Justice League movie are laid side-by-side, in a scene where Bruce (Ben Affleck) talks to Diana (Gal Gadot) near a lake.

Really, it’s just a plain brown jacket that connects the two images, and the fact that both sources feature a grizzled, older Batman. But fans just can’t help but think of the possible Easter egg, as fans tend to do. Even then, some fans on Reddit think it’s a “faaaar reach,” says user imoldgregg420. But, as other users point out, character wardrobes on big-budget movies aren’t thrown together all willy-nilly, meaning it was a conscious decision to dress Ben Affleck in that specific jacket, as opposed to literally anything else.

While in the mainstream DC canon Batman forms the Justice League pretty early on in his career, in the new DC movie universe, Batman has been active for close to 20 years when he finally forms the DC Universe’s superhero ensemble to defeat Steppenwolf. Following the events of Batman v Superman: Dawn of Justice and, presumably, Suicide Squad, Batman follows Superman’s example and reaches out by assembling a team of meta-humans, including Wonder Woman, the Flash, Cyborg, and Aquaman, to save the world.

Justice League will be released everywhere on November 17.