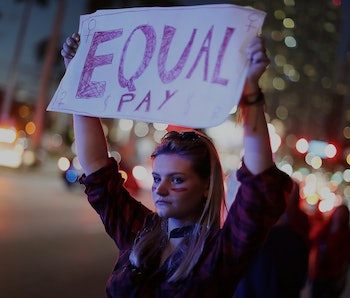 The most recent findings on gender equality globally paint a bleak picture: According to a report from the World Economic Forum, it will take at least 100 years to close the gender inequality gap.

It’s even worse for the gender pay gap, which currently shows that on a global average, women make 63 cents per every dollar a man earns. That’s the lowest value since 2008 — the year of the global recession.

Rather than making advances, the U.S. is one of the countries where gender gap has actually widened. Of the 144 countries assessed, the U.S. came in at 49, dropping a whopping 26 spots since 2006, when the organization first released its report.

Nordic countries claim the top three spots, and have long been able to do so with policies that split childcare responsibility between both parents and quotas on gender representation among company leadership.

When you look at the breakdown of U.S. equality scores across the four spectrums measured — economic, educational, health, and political — the results are sobering. The U.S. jumped to No. 1 in educational attainment — albeit, tied with 26 other countries — but this stat is offset by the incredibly high inequality in “political empowerment.” The WEF notes that this is largely due to “a significant decrease in gender parity in ministerial level positions,” aka politicians in federal roles, over the past year. The Trump administration has garnered significant attention for assembling one the most male-dominated federal governments in decades.

As global countries struggle to decrease the equality gap, this new estimate that it will take a century to put women on equal footing with men is a huge rise from last year’s estimate of 86 years. And the rate of progress is even worse specifically in North America; the WEF estimates it will take 168 years to reach gender equality.

And while the global education gap could close in as little as 13 years, an easing of economic inequality could take more than two centuries, the WEF reports.

This downward shift is also bad for business. According to accounting giant PwC, they estimate that closing the gender gap could add more than $1.75 trillion to the U.S. GDP.

More like this
Culture
Sep. 16, 2022
How an ultra-nationalist religious group became one of the most popular film producers in Japan
By Alicia Haddick
Culture
Sep. 15, 2022
The cults that survive even when the prophecy fails
By Peter Ward
Culture
Sep. 15, 2022
5 years ago, Nicolas Cage made his most disturbing movie ever
By Laura Kelly
Related Tags
Share: