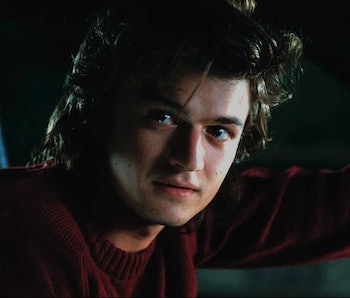 Nostalgia for the ‘80s permeates through every detail of Stranger Things, but the most curious retro item from the Netflix show is Steve Harrington’s Farrah Fawcett Hairspray. One might even say it’s the show’s very own Szechuan sauce.

“Szechuan sauce,” of course, refers to the insane response following the Rick and Morty Season 3 premiere in April, which glorified a discontinued McDonald’s sauce from the ‘90s. Now, the fast-food chain has plans to bring it back en masse this winter. The anachronistic equivalent for Stranger Things might just be the hairspray that Steve uses to look so good.

Since Season 1, fans have applauded Steve Harrington’s hair, even when he was a total jerk. When Steve and Dustin team up in Season 2, Steve offers up romantic advice and, more importantly, his dope hairstyling regimen:

“Fabergé Organics. Use the shampoo and the conditioner, and when your hair is damp — it’s not wet, okay? — when it’s damp, do four puffs of the Farrah Fawcett spray.”

Farrah Fawcett spray? Sounds ‘80s AF, and like most people, we couldn’t help but wonder: Did it really exist?

Fabergé Organics put out Farrah Fawcett’s line of beauty products in the ‘70s and ‘80s, which included shampoo, conditioner, and, yes, hairspray. It’s possible that all of Steve’s hair products had Fawcett on the label. Unfortunately, the McGregor Corporation bought Fabergé Organics in 1984, discontinuing most of its products. Even the newest bottles of the hairspray are more than 30 years old.

By the time Dustin wields some of the incredible hairspray at the Snow Ball, it’s already December 1984, so the stuff was presumably hard to find, even then.

Joe Keery, the actor behind Steve, assured Esquire that there’s no real magic behind his actual hair, saying, “It’s not like I really do anything for my hair, I just wash it every three to four days. People seem to be mystified by it. It’s mostly just my parent’s hair.” But he did refer fans to eBay if they wanted to try the spray for themselves.

The product is hard to find on eBay, but one auction running right now is currently at $61 for a “mostly full” bottle of the stuff.

Can the Stranger Things fan base shame corporate America into resurrecting a dead product? If Rick and Morty fans can do the same and jack up prices on eBay, then anything is possible.

Stranger Things 2 is now available to stream exclusively on Netflix.