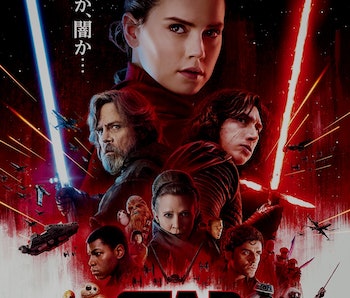 It is truly unclear how much a movie’s shocking plot twist gets hinted at in the marketing materials. But that’s not stopping Star Wars fans from guessing Rey may join the Dark side in Star Wars: The Last Jedi, a theory only fueled by none other than Luke Skywalker himself.

On Wednesday, veteran Star Wars actor Mark Hamill, who will have a more prominent role in Star Wars: The Last Jedi than 2015’s Star Wars: The Force Awakens, tweeted out the official Japanese poster for The Last Jedi. Playing up the tradition that villains loom in the background of every Star Wars movie poster (except The Clone Wars), Hamill teased that Daisy Ridley’s Rey, who takes up most of the Japanese poster’s real estate, will turn from the Light to the Dark side of the Force.

“Hey you Dark Side theorists: Look who’s looming at the back of the poster now! Another clue for you all…” Hamill wrote, before adding the hashtags: “#TheWalrusWasPaul #WaitForVIII.” (The walrus hashtag is most likely a reference to the conspiracy theory that Paul McCartney died in 1966 and was replaced in the Beatles by a lookalike who later famously left the band behind; he’s likening Star Wars fans to conspiracy theorists.)

Hamill’s tweet is only his latest act of trolling the fandom. Last month, Hamill tweeted out a fan-made infographic that speculated on this theory, adding his own twist on the whole thing. “NEWS FLASH for all you ‘Villains Looming at the Back of Posters’ theorists: Luke was ALWAYS the villain! (from a certain point of view),” Hamill joked.

Not long after, IMAX tweeted a theatrical display for Star Wars: The Last Jedi that will appear in select theaters across the United States. In the display, Hamill’s Luke Skywalker is on both the Light and Dark “sides” of the display, which did wonders for fans who think they’re starting to catch on.

Now, Hamill is still playing up every Star Wars fans’ curiosity over whether or not Rey will join the Dark side. And she might! That Last Jedi trailer was awfully ominous. Needless to say, it’s going to be a long wait for the whole story to complete when Episode IX hits theaters in 2019.

Star Wars: The Last Jedi will premiere in theaters on December 15.