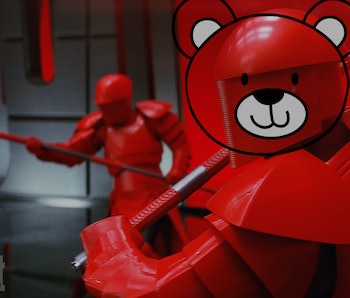 Ewoks and Porgs were made for cuddling. But what about Supreme Leader Snoke’s fearsome Praetorian Guards?

Lucasfilm has formed an alliance with Build-a-Bear to churn out a host of new Star Wars: The Last Jedi-themed bears and costumes. The newly revealed marketing scheme includes Chewbacca and Captain Phasma-style teddy bears, a Porg plushie, and… a blood-red Praetorian Guard bear outfit.

Similar to 2016’s Death Trooper Halloween costume for kids, the idea of decking a teddy bear out as a Praetorian Guard is a bit unsettling. Not only does the costume look a bit too slick to be comfortable for cuddling, but the Praetorian Guards aren’t exactly nice.

In fact, the Praetorian Guards are downright terrifying, since they’re Supreme Leader Snoke’s ruthless protectors, meant only to kill or be killed. That doesn’t exactly describe a teddy bear or something that kids might want to play with.

And that’s not to say that plenty of people in the world don’t love or identify with the villains of Star Wars. Darth Vader costumes, no doubt, abound across generations. But considering that the Praetorian Guards are neither iconic nor beloved for their loyalty or pain yet, it seems a bit preemptive to go all-in on the faceless bear costume.

The only way this could get better is if one of the Guards has a family and one of their kids is seen with this exact bear in Last Jedi. That might make more sense.

If you liked this article, check out this video of a customizable toy lightsaber.