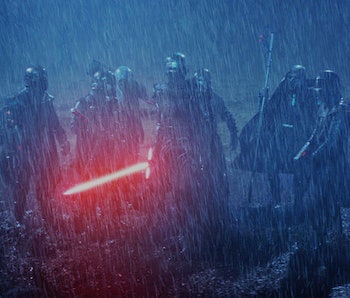 Are Supreme Leader Snoke’s Praetorian Guards actually Kylo Ren’s old buddies, the Knights of Ren? Images from the recently updated version of Star Wars: Absolutely Everything You Need to Know might have answered that all-important question.

According to the images posted by Reddit user chem072117 on r/StarWarsLeaks, the Praetorian Guards are tasked with “personally protecting Supreme Leader Snoke from any threat,” but we already kind of knew that. What we didn’t know was that all eight of Snoke’s guards are human.

Star Wars fans got a glimpse of the knights in Star Wars: The Force Awakens during Rey’s vision sequence. It’s been hinted that Kylo and the rest of the knights were directly responsible for the downfall of Luke Skywalker’s new Jedi academy. And, just maybe, they were encouraged by Supreme Leader Snoke — Kylo’s master — to kill Luke’s new proteges. It’s even been suggested that every single one of the knights were students at the new academy alongside Kylo.

Other than Kylo, there were six Knights of Ren. Because they’re all masked, there’s no telling if all of them were human, but the number certainly indicates that they couldn’t possibly be the same beings as the Praetorians. That is, unless there were two we never saw.

If the Praetorians aren’t the Knights of Ren, then that means the knights are hanging out somewhere in the galaxy, waiting for the right moment to strike. Maybe Star Wars fans will get to see them in action soon.

If you liked this article, check out this video on why C-3PO was the unsung hero of Star Wars.