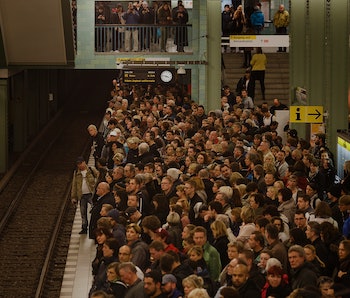 Commuting is one of those necessary evils that’s baked into modern cities like noise pollution and too many pigeons, but new research has found the malaise it invites is costing workers significantly.

The commute to and from work engulfs around 50 minutes of the average American day and — as anyone who’s ever taken a 9 a.m. ride on the New York City subway knows — fresh horrors await you daily as ill-equipped infrastructure tries to get too many people from Point A to Point B. The frustration that comes from long delays and cramped journeys is nothing new, but a recent study out of the University of the West of England has put a dollar sign on the commuter experience, and it might make you think twice about your next metro pass.

Researchers analyzed data from a government-run questionnaire called the UK Household Longitudinal Study, a survey that quizzes adult members of 40,000 households throughout the UK. Using questionnaire data collected between 2009 and 2016, researchers not only concluded that commuting sucks — we already knew that — but that an extra 20 minutes tacked onto a day’s commute can result in a worker’s job satisfaction dropping to the equivalent of taking a 19 percent pay cut. In other words, a long and crappy commute can significantly affect your satisfaction with your job.

This information is significant because commutes are not getting any shorter. Quite the opposite, in fact. According to Census data, American commutes have been getting longer since at least 2010. Data from 2015 showed that 45-minute commutes grew by 3.5 percent in 2014, while hour-long commutes grew by 5.1 percent.

There are Solutions for Soul-Sucking Commutes

Before you totally despair that your commute is going to make you feel like you’re making less money every year ad nauseam, know that technology is finding ways to capitalize on what is definitely a broken system. App-based ride-sharing services, like Ford’s Chariot passenger vans, are trying to make a dent in NYC’s over-burdened transit system, and will likely expand to more cities. A veritable cottage industry has sprung up around trying to solve the “first/last mile” problem of commuting, or how to get people from their home to the commuter rail or subway.

Elon Musk’s pet venture, the Boring Company, envisions elaborate tunnel systems underneath cities as the answer to above-ground gridlock. It might seem like a pipe dream (pardon the pun) but the Boring Company has already started tunnelling an airport route below Los Angeles, and another project has been green lit in Maryland.

As technology improves with chat apps like Slack to keep employees communicating from afar, working from home has become increasingly feasible, and apparently even more productive. That same Gallup report found that the “most engaged” workers were the ones who spent 60 to 80 percent of their week working from home.

This new information about how commutes are cutting into job satisfaction only reinforces a growing body of data that says we need to do something about our crappy commutes. As the saying goes, money talks, and nobody likes a pay cut.

More like this
Mind and Body
6.27.2022 12:30 PM
Stop wasting money on this ineffective daily regimen
By Elana Spivack
Science
4 hours ago
Jupiter's core hides a disturbing cannibal past — study
By Jeff Nagle
Science
6.29.2022 2:00 PM
Daily multivitamins may have no health benefits — and some might cause harm
By Steph Lee
Related Tags
Share: