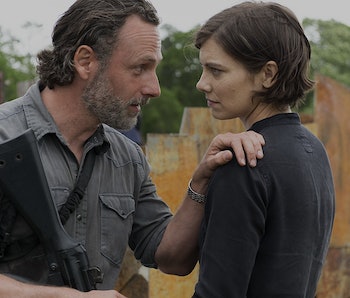 A year ago, fans of The Walking Dead were introduced to the true terror of the apocalypse: Negan, a sociopathic warlord who commands an army with just one look. While Jeffrey Dean Morgan literally bats a thousand as Negan, his new villain brought an overwhelming despair to Season 7 that made Sunday nights exhausting. But for those who stuck around, Sunday’s Season 8 premiere, “Mercy,” was paydirt. Not only has war begun between Rick and Negan, it looks Rick could actually win this thing. And bizarre “flash-forwards” may be the clue to Rick’s eventual victory over Negan.

Mild spoilers for The Walking Dead Season 8, Episode 1 are below.

Last season, The Walking Dead went overboard in its efforts to establish Negan as a threat. But between his ruthless sadism and a juvenile obsession with his own dick, Negan turned The Walking Dead into an endurance test.

But, with the season 8 premiere, it feels like someone has opened a window and let in the air. After more heart-throbbing suspense, the Season 8 premiere delivers on the bang-bang action that was always meant to happen between Alexandria and the Saviors. And unlike last year, there really is hope things will work out in the end. Not only do the people of Alexandria finally have the upper hand and Negan is up shit’s creek — trapped with Father Gabriel, separate from his Saviors, in a non-descript trailer surrounded by hordes walkers — but the episode pretty much spoils what’s going to happen by the season finale in April.

Without even knowing what happens in the comics, Season 8 instills the idea that Rick and his side are going to win this. There are even some strange “Old Man Rick” flash-forwards to a peaceful Alexandria that may be the biggest clue.

As always, the show doesn’t explain what is going on with these scenes. Armed with the visage of artistic, prestige TV (even though The Walking Dead hasn’t had any prestige since Season 1), “Mercy” introduces a framing device in which an “Old Man Rick” lives a peaceful life in Alexandria with Michonne, Carl, and a grade-school Judith. They’re even all listening to Weird Al Yankovich, one of the show’s scant few references to outside popular culture.

Loosely modeled after Sasha’s flashbacks from the Season 7 finale, Rick’s “flash-forwards” could be Rick hallucinating, or they’re visions from a future that may or may not happen. Who knows. They come out of nowhere and the cinematographers rubbed Vaseline over the camera lenses for that soft gaussian look, which is just hilarious.

Honestly, it’s best to ignore these scenes. They’re distractions to the exciting stuff: the war with Negan. The real portent to the future fans should pay attention is in the episode’s closing shot, where Rick delivers an inspiring pre-battle speech in front of a rising sun. Rick declares: “We’ve already won,” which is as obvious as it gets. Between now and then is just a matter of how Rick will lead his people to get there, and what sacrifices they’re going to make along the way.

For those hoping for a true ground war between Rick and Negan, Season 8 has yet to deliver. The premiere was a battle — a thrilling battle full of intricate, domino-like planning, but a battle nonetheless. While no one has access to helicopters and tanks in the apocalypse, they do have makeshift vehicles that are several steps away from looking like the stuff that roam in Mad Max. A truly epic firefight may or may not be still in store for The Walking Dead, and it would be appreciated if that spectacle could still happen. But based on how the premiere of Season 8 went, it looks like the war is already over.