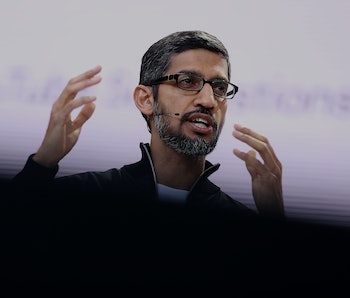 Sundar Pichai thinks Elon Musk has a point about A.I.. The Google CEO was told in a recent interview that Musk had weighed in on the company’s new Google Clips camera, which uses artificial intelligence to capture photos automatically, and the Tesla CEO wasn’t exactly a fan.

Musk, who’s spoken before about the problems such super-smart systems pose, said Clips “doesn’t even seem innocent,” an assessment Pichai responded to rather diplomatically.

“He’s a deep thinker about problems, and I think it’s right to be concerned about A.I.,” Pichai told Bloomberg in an interview published Thursday. He went on to say that because society can’t press the pause button on tech advancements, Google’s role is to be a “thoughtful and ethical” steward. “None of us have answers yet, which is what Elon is pointing out.”

Concerned is one word for it. Musk told a room full of U.S. state leaders over the summer that artificial intelligence is “a fundamental risk to the existence of human civilization.” In fact, Musk advocates for the use of neural lace, wired directly into people’s brains, for “humanity to achieve symbiosis with machines” and avoid a hostile takeover.

Musk’s repeated warnings about the future of humanity have left researchers exasperated. Pedro Domingos, an A.I. researcher based at the University of Washington in Seattle, responded to his warning to state leaders with a single word: “Sigh.”

Google is altogether more optimistic about A.I.’s benefits. The Clips camera is part of an overall push away from being a “mobile first” company toward an “A.I. first” approach. The $249 device was unveiled earlier this month as part of a lineup that included two new smartphones and a number of smart home products, all of which tout deep integration with the Google Assistant voice-activated Siri competitor. In a previous interview with The Guardian, Pichai said the new approach meant “interactions become even more seamless and natural.”

But Musk hasn’t dismissed the notion of artificial intelligence outright. Indeed, his Tesla Autopilot project plans to use machine learning to drive a car autonomously at a later date. But where Pichai sees Google as playing the role of the technology’s shaper, Musk prefers the idea of “some sort of government regulatory agency” to ensure A.I. is put to good use.

“I just think we need to make sure people do not cut corners on A.I. safety,” Musk told an audience in July. “It’s going to be a real big deal and it’s going to come on like a tidal wave.”

If you liked this article, check out this video of Elon Musk’s unbeatable A.I. bot in DOTA 2.