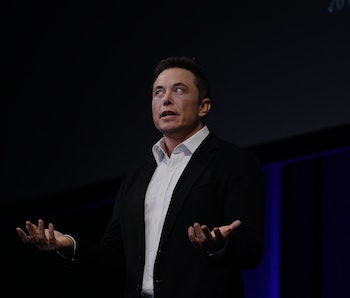 Elon Musk is concerned about Google’s Clips camera. Clips, an artificial intelligence-powered, rather cute-looking gadget measuring a mere 1.9 inches per side, is designed to automatically take photos of a user’s life without any intervention. Think of an off-white, mini-HAL from 2001 that doesn’t talk (it just watches).

Musk, who has warned about the dangers of overly-intelligent machines before, is unsurprisingly not too keen on the idea.

“This doesn’t even seem innocent,” Musk commented to his 13.4 million Twitter followers on Saturday.

Clips is part of Google’s new push away from its role as a “mobile first” company toward being an “A.I. first” firm. Unveiled last week, the $249 device (currently sold out on Google’s site) weighs two ounces, and lasts up to three hours between charges, during which time it’ll keep an eye out for crucial moments and good framing using its Moment IQ machine learning algorithm.

“In an A.I.-first world, interactions become even more seamless and natural,” CEO Sundar Pichai told The Guardian in a interview published on Sunday.

The gadget is designed to remove the need for someone to stand behind a camera capturing the action. The clip can act as a miniature stand, or hang on a peg for a higher-up position. While it’s active, the camera learns faces and tries to capture faces more frequently. It stores short clips without audio called “motion photos” to its 16-gigabyte internal storage, ready for transfer to a phone later. It all sounds innocent enough, but Musk seems concerned about the camera’s use case.

This topic is nothing new to Musk, who has been warning about the dangers of overbearing A.I. for some time now. He’s highlighted the double exponential at work in A.I. development, with both hardware and software increasing in capability at a staggering rate, and called for developers to ensure “we don’t do something really dumb.” He’s argued instead that we create artificial intelligence in a responsible way. The alternative is that a system is developed that has further-reaching repercussions than expected, with detrimental effects on society.

See also: The Singularity Could Be Closer Than You Think

Not everyone buys into Musk’s idea that A.I. could reduce humanity to “house cats” if left unchecked. In fact, some experts like Google’s senior vice president of engineering John Giannandrea believe that Musk’s regular comments border on irresponsible. Even Microsoft co-founder Bill Gates, who said in a 2015 Reddit discussion that he had “concerns” about super intelligence, thinks Musk is perhaps wrong.

“The so-called control problem that Elon is worried about isn’t something that people should feel is imminent,” Gates said in an interview last month. “This is a case where Elon and I disagree. We shouldn’t panic about it. Nor should we blithely ignore the fact that eventually that problem could emerge.”

While Google Clips may not be the overbearing super-intelligence Musk had in mind, his comments are a sharp reminder that as artificial intelligence gets smarter and smaller, its use cases could turn rather unsettling in a short space of time.

Artificial intelligence will colonize space before humanity. Check out this video to find out more.

More like this
Science
Jan. 28, 2023
ChatGPT could help students cheat — but it could also revolutionize education
By The Conversation and Sam Illingworth
Innovation
Jan. 25, 2023
Starship orbital flight: SpaceX successfully loaded the rocket with over 10 million pounds of propellant
By Mike Brown and Molly Glick
Innovation
Jan. 25, 2023
Watch: This jail-breaking wireless robot melts and reassembles on command
By Jennifer Walter
LEARN SOMETHING NEW EVERY DAY.
Related Tags
Share: