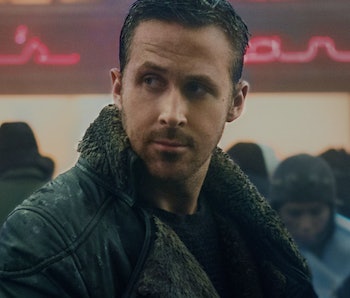 Halloween is almost upon us, and that means it’s time to start scrambling for a costume if you didn’t plan ahead. With Blade Runner 2049 currently in theaters it might be a good opportunity to cosplay October 31 like you’re from a replicant-filled Los Angeles future.

While Harrison Ford’s Rick Deckard is an easy choice, slick grey shirt and all, it might be prudent to dress up as the main Blade Runner of the new film, Ryan Gosling’s Officer K; who spends plenty of time in 2049 getting beaten up and running around without cleaning up any of the blood.

With Amazon Prime, a few internet purchases could cinch your Officer K. Here’s what what you’ll need to look the part:

The biggest clothing item for your Officer K costume is probably going to be your most expensive, no matter where you buy it, and especially because your options are slightly more limited since you’ll need it soon. While there are plenty of replicants (get it?) available for a higher price, this uxcell Allegra overcoat seems like your best, most cost-efficient bet for the most recognizable piece of Officer K’s outfit.

Though Officer K has a knitted pullover in Blade Runner 2049, it’s not exactly key to the look. You can easily go with a plain black longsleeve shirt like this one from Fruit of the Loom ($8). But if you want that knit look, spring for a more expensive black Ohoo pullover sweater.

Any black boots will probably do here, but for something more along the lines of what K wears in the movie, these tactical work boots from Dexter will do the trick.

At this point, especially if you splurged on the coat, you could probably get away with just wearing whatever pants you have. But if you’re already too far down the rabbit hole on this, you could do worse than these Carhartt Carpenter Jeans.

Unless you look like Ryan Gosling, Officer K’s outfit isn’t the most distinctive movie costume out there. But given K’s propensity for getting the shit beat out of him throughout the film, fake blood is a must. A whole pint of fake blood will put you back $8. You could also go the route of Hong Kong martial arts film stage blood and use red food coloring and cough syrup (or just red cough syrup). Throw in some band-aids if you want to look like slightly patched-up K following his fight with Dave Bautista’s character, Sapper Morton.

For good reason, a lot of toy guns these days — even futuristic ones — are sometimes very clearly not realistic-looking. This plastic pistol can pass for a Blade Runner blaster. Plan b: find a dollar store water pistol.

More like this
Culture
November 12, 2022
Face/Off is classic Nicolas Cage at his absolute best
By Laura Kelly
Culture
November 26, 2022
Steven Soderbergh’s only sci-fi movie is better than you remember
By Josh Bell
Culture
November 24, 2022
One of A24’s least-seen movies is also one of its most intriguing
By Dais Johnston
Share: