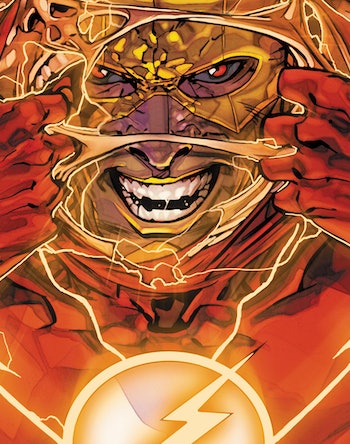 When it comes to DC’s The Flash, Joshua Williamson may be the biggest fan alive. At the drop of a dime, he can cite specific issues of the Scarlet Speedster with total confidence in the trivia: What happened, who wrote it, what number, when it was published, even how it changed Barry Allen in the long term. In the DC Universe, The Flash has “The Flash Museum” in his honor. If it existed in real life, Joshua Williamson would be its curator.

But, as Williamson, lead writer for the comics series since early 2016, told Inverse at New York Comic Con recently, his own obsession with The Flash helped re-define Allen’s most dramatic nemesis: Eobard Thawne, aka the Reverse-Flash. In the aftermath of his “Running Scared” story arc — one of the biggest Reverse-Flash story arcs of all time — Williamson says that he infused so much of himself into a tale about obsession and superhero idolatry.

“That was me, essentially,” Williamson (@Williamson_Josh] tells Inverse about “Running Scared,” which will be collected and released in trade paperback on November 21. In the arc, Barry Allen confronts Eobard Thawne, an obsessive Flash stan, possibly for the last time.

“Thawne, in the future, idolizes this hero, essentially reading his comic books. I could relate to that. I can relate to this idea of Thawne idolizing him,” Williamson says. “Imagine you have your favorite comic book character, and then you meet him, and they disappoint you.”

Williamson didn’t create Eobard Thawne — that honor goes to John Broome and Carmine Infantino, who introduced him in The Flash #139 in 1963 — but Williamson relates to Eobard Thawne more than anyone else. Because in some ways, Williamson did meet his idol and was also disappointed.

In 2015, then Batman writer Scott Snyder told Williamson personally that he should write for The Flash due to his robust knowledge of the character. Williamson brushed it off. “That was never gonna happen. It was a dream job.”

“Day and night, I couldn’t sleep. I was thinking about the Flash.”

Last year, Williamson’s dream came true when he was hired as the series writer of The Flash, which relaunched with DC’s soft reboot “Rebirth.” Williamson was living the dream, until reality hit: Williamson knew everything about the Flash, except writing him.

“When I started working on it, I thought I knew the character. But I had a fan perspective. I wasn’t in his head,” he says. As Williamson struggled to get a hold of Flash’s voice, he found minor comfort in that the most acclaimed Flash writers of all time, Geoff Johns and Mark Waid — both favorites of Williamson — also had a “runway” period before things took off.

“It’s interesting how my favorite runs have these weird runways in them,” he says. His Flash knowledge then goes into overdrive.

“Look at Mark’s run. He was on the book for awhile, about a year before ‘Return of Barry Allen.’ That ended in #79. #80 was the launch of the new costume and foil cover. And then the next beat was Impulse getting introduced, that’s #92, and then you have ‘Terminal Velocity’ which goes up to #100. At that point, [Mark Waid’s] been on the book for three years, and that’s when you can feel when Mark started, no pun intended, really running with the character.”

All of that came from the top of Williams’s head. He doesn’t hesitate or Google a thing. And still, the writer admits to his shortcomings in spite of knowing The Flash better than any of the other 100,000 fans packed inside the Javits Center in Manhattan in early October.

“I’ve been working on Flash for two years and I’m still figuring stuff out. I look back and would change a couple things if I could. But I learned a lot about the character and things I want do with him moving forward. I’m really excited about next year because of that.”

Next year, Williamson will feature the original Wally West (Barry’s successor to his Flash mantle in the ‘90s) in a massive storyline called “Flash War.” He repeatedly describes the story as “big” as can be.

“Next year the story is gonna be big and crazy,” Williamson teases. “We were able to set up and put out all these pieces, and it took awhile to get there, but next year with #39, we get to do them. I’m thankful I got to have those [first] issues to tell meaningful stories that were important and fun. Now I get to tell really big stories with the Flash. I’ve got him where I need.”

“I feel very confident in the book right now,” he says..

As for the semi-autobiographical Reverse-Flash, it’s unknown if or when Eobard will return (Williamson does teases that Iris West’s murder of Eobard in “Running Scared” will be a big deal to Wally when he returns in “Flash War”). But Williamson isn’t in a rush. To him, he has told the ultimate story about fandom and obsession.

“For awhile, people were writing Thawne like he was the Joker. I didn’t like that. He’s not the Joker, dude,” Williamson remarks. To prove it, Williamson worked with Batman writer Tom King in their collaborative crossover, “The Button,” released last spring as a prelude to Doomsday Clock coming next month.

“By that time, I was so deep in Thawne’s head that when we [Tom King and I] talked, I knew it,” he says. “I know that character well. Too well.”