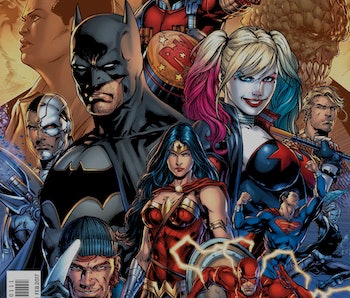 What Batman lacks in superpowers, he makes up for in an uncompromising moral compass — but he’s not the only one in the DC universe with ironclad convictions, and the big bad in Justice League vs. Suicide Squad might give him a run for his money. The Dark Knight’s rigid ethics have at last led him to shut down Amanda Waller’s mega immoral team, but the Bats soon realizes, he’s not the only one with a similar ethos — and someone else is pulling the strings. Writer Joshua Williamson tells Inverse that the super villain behind Justice League vs. Suicide Squad thinks the same way Batman does.

Justice League vs. Suicide Squad #1, the first major event of DC Rebirth, Batman learns the existence of Task Force X, he leads the Justice League to bring them out of Amanda Waller’s custody, but there’s someone else pulling the strings — Maxwell Lord, the ex-business tycoon and now full-time supervillain who still has the power of suggestion.

Lord returns to the DC Universe, and in the closing moments of Justice League vs. Suicide Squad #1, Maxwell recruits his own “Suicide Squad”: Doctor Polaris, Emerald Empress, Johnny Sorrow, Rustan, and Lobo. They want to kill Waller, and Maxwell promises he’ll help them — if they help them in return.

First things first: They aren’t the new Onslaught, the terrorists-for-hire that’s faced off the Suicide Squad on multiple occasions. But they will have a name, according to Williamson, and they’re here because of Maxwell Lord.

“[Maxwell Lord] really sees himself as being the only person who understands this world can be fixed,” Williamson tells Inverse about the true antagonist of Justice League vs. Suicide Squad. “He feels like this group of people are a team he can manipulate to do what he wants. There’s a cockiness and confidence in him that everything he’s doing will be worth it in the end to help people. And to get there you have to do bad things.”

Williamson mentions that this is why and how Maxwell Lord is such a suitable third between Amanda Waller and Batman. “He recognizes that sometimes to do that you have to use people, which is a parallel with Amanda Waller and to some extent with Batman,” explains Williamson. “They all believe theyre right. And that’s the thing the best villains want you to believe, is that they’re right, that they’re the hero of their own story.”

“Using people” isn’t the phrase Batman would use, but that’s also the point. More than any other DC superhero, Batman has molded dozens into his image, and while Superman often takes leadership of the Justice League, it’s Batman who gets the gears in motion for Justice League vs. Suicide Squad which Williamson promises will stay true to its “vs.” moniker. “Everyone expects them to team up at some point, but I feel like this series is quite not what people are expecting,” Williamson tells Inverse.

Williamson wouldn’t reveal too much about Lord’s intentions to form his team, but it is rooted in the elimination of Amanda Waller, which Williamson says is something they all want. “Max never makes somebody do something. A part of them wants it,” he says. “He has to push, he has to compel, and if he wants to make someone do something, it takes time and he has to push hard. What he wants that team to do is what they already want to do.”

Justice League vs. Suicide Squad #1 is available now. Issue #2 will be released December 28.

More like this
Gaming
5.10.2022 4:14 PM
Everything you need to know about the next big Batman game, Gotham Knights
By Joseph Yaden
Entertainment
5.20.2022 11:00 AM
Why Moon Knight’s head writer refused to “go toe to toe” with Batman
By Eric Francisco
Entertainment
5.24.2022 6:17 PM
Thor 4 trailer Easter egg reveals a surprising multiverse connection to Doctor Strange 2
By Alex Welch
Share: