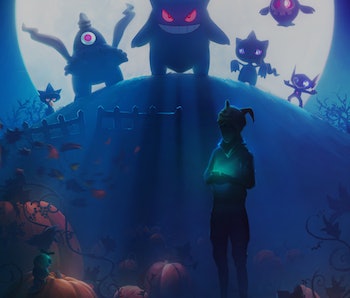 When the autumn leaves drop and cool air settles over the city, it means one thing: Halloween is here. And Pokémon GO creator Niantic is celebrating in a big way by potentially unleashing third generation Pokémon into the number one smartphone app from 2016.

On Reddit’s dedicated Pokémon GO community page The Silph Road, fans have uncovered spooky secrets hidden in the latest update, including metadata like “HALLOWEEN_2017” and “mapHalloweenNightmusic.” Silph Roaders even found a new night theme, “Lavender Town,” named after the infamous village haunted by ghost Pokémon in the original game.

But the biggest new thing is the possible arrival of Generation 3 Pokémon. Along with all the Halloween stuff, there are numerous references to Generation 3, such as Gen 3 Pokémon sound files — Silph Road specifically mentions Deoxys — and a Generation 3 badge, which is awarded to victorious Pokémon trainers.

On top of all this, there is a new horror-themed splash page featuring spooky Generation 3 Pokémon like Sableye, Shuppet, Banette, Duskull, and Dusclops, who all accompany Gen 1 staples like Gengar and Zubat. Historically, Niantic uses the game’s loading screen to reference ongoing events; since June, when Niantic implemented multiplayer raid battles, the loading screen showed a group taking down a Tyranitar in a stadium.

This year’s Halloween is shaping up to be a bigger deal for Niantic than it was last year. For Halloween 2016, there was a focus on candies (get it? trick or treating?) and an abundance of ghost and psychic-type Pokémon to catch. And that was it! Now, the implementation of Generation 3 all but confirms that Halloween 2017 is one of the biggest things to happen to Pokémon GO since it became a phenomenon last year.