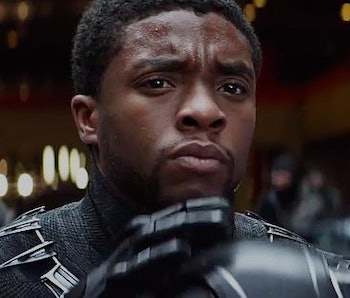 The revolution will not be televised. In the new trailer for Marvel’s Black Panther, released on Monday, the internal struggle brewing within the kingdom of Wakanda will take center stage as the warrior-king T’Challa fights to maintain peace and prevent devastating civil war.

While the film isn’t based on any single Black Panther comic, much of the storyline seems influenced by Ta-Nehisi Coates’s current Black Panther series, which began in the spring of 2016.

For those unfamiliar to this particular corner of the Marvel Universe, you may be wondering just who the bad guys are that are starting all this mayhem that Black Panther — played by Chadwick Boseman in the movie that comes out in February — has to clean up.

As always, Inverse is here to help. Below’s a brief guide to the three biggest villains expected to cause the most headaches in Black Panther.

Introduced way back in Jungle Action #6 in 1973, Erik Killmonger has been a longtime nemesis of T’Challa, functioning as a psychologically conservative opposition to the somewhat more progressive T’Challa. He’s also his physical equal, making Erik Killmonger a formidable nemesis out in the field.

In the film, Erik Killmonger is played by Michael B. Jordan, and is a Wakandan exile who seeks to overthrow T’Challa from the throne. He’s also got his own suit of sorts, modeled after a gold and bronze jaguar.

In an interview with Entertainment Weekly, executive producer Nate Moore said Killmonger “has his own opinion on how Wakanda has been run and should [be] run” and “is a voice of a different side of Wakanda” which “puts T’Challa in a difficult situation.”

Created by Roy Thomas and Steve Buscema in the pages of Avengers #62 but better defined by Christopher Priest in his influential run on Black Panther in the 2000s, M’Baku is also known as the Man-Ape, and is the second strongest warrior in Wakanda. In the comics, M’Baku wanted Wakanda to return to a primitive state, so he joined forces with a radical religious cabal known as the White Gorilla Cult, who performed a supernatural ritual that endowed him with superhuman abilities.

Things are a little different in the movie. Played by Winston Duke (Person of Interest), M’Baku is the leader of a Wakandan mountain tribe known as the Jabari. In a conversation with ComingSoon, Duke said that the Jabari “strongly believe that to move forward, you have to have a strong adherence and respect for the past.” M’Baku seeks Wakanda to abandon its reliance on vibranium, the rare metal (also found in Captain America’s shield) which has allowed Wakanda to scientifically progress beyond the rest of the world.

It is also revealed taht M’Baku will not go by the name “Man-Ape” due to some potential complications, though the Jabari do worship spiritual gorilla gods, which appears to be an element lifted from the White Gorilla Cult.

First seen in Avengers: Age of Ultron, Andy Serkis reprises his role as the unbelievably creepy and charming Ulysses Klaue, a South African arms smuggler who got in the way of the Avengers in their fight against Ultron. In 2015’s Age of Ultron, Ultron severed Ulysses’s arm, and since then, Ulysses got himself Mega Man-like upgrades in Black Panther.

Marvel’s Black Panther will be in theaters on February 16, 2018. Watch the newest trailer below: