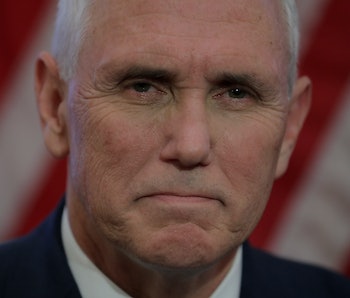 It’s been well-documented that the world didn’t end after America legalized same-sex marriage, but opponents of the Supreme Court decision haven’t cooled off.

An exchange in the White House reported on by The New Yorker in an in-depth profile of Vice President Mike Pence feels like a prequel to the The Handmaid’s Tale, with President Donald Trump joking about the genocide of an entire segment of the population.

In “The Danger of President Pence” by reporter Jane Meyer, Trump, the Manhattanite, is reported to make fun of the hard-line views of Pence, the Hoosier.

The bolded quote below is what had gone viral on the internet on Monday.

Two sources also recalled Trump needling Pence about his views on abortion and homosexuality. During a meeting with a legal scholar, Trump belittled Pence’s determination to overturn Roe v. Wade. The legal scholar had said that, if the Supreme Court did so, many states would likely legalize abortion on their own. “You see?” Trump asked Pence. “You’ve wasted all this time and energy on it, and it’s not going to end abortion anyway.” When the conversation turned to gay rights, Trump motioned toward Pence and joked, “Don’t ask that guy—he wants to hang them all!”

Steve Bannon, the ousted adviser to Trump, told Mayer that the president was known to clown on the VP by asking guests who had visited Pence’s office, “Did Mike make you pray?” — which to be fair, is perfectly fine New York City-style chops-busting. Trump’s disagreement with Pence’s views came up in more formal meetings, too. One such instance was when Trump contended that Roe v. Wade wouldn’t be overturned by the Supreme Court, and if it was, states would merely legalize abortion on their own, as is their right.

“You see? You’ve wasted all this time and energy on it and it’s not going to end abortion anyway,” Trump told Pence in a meeting, before the conversation moved to same-sex marriage that resulted in the “hang ‘em all” joke.

The crux of Mayer’s piece is that while Trump has a long list of well-documented problems that may very well see him impeached or bring the country to war, Pence would bring a new set of problems — albeit more traditionally Republican ones — to the Oval Office.

“I think he’s the most likely Republican nominee in 2024,” former Speaker of the House Newt Gingrich told Mayer in her story. So, we may see President Pence yet.

Pence’s public hatred of LBGT people is out in the open for anyone to see. He has disparaged them in speeches and in policy. He opposed laws that would ban the discrimination of LGBT people while at work and rejected the idea that transgender bathrooms in schools should be OK.

Perhaps most relevant to Trump’s comments, Pence said in a speech that same-sex marriage would result in a “societal collapse” because it would equate to the “deterioration of marriage and family.” It’s still unclear how two men being married is going to deteriorate a separate straight marriage.

(The story in The Handmaid’s Tale of course, began because of a societal collapse, but Margaret Atwood’s 1985 novel saw society break down because of low fertility rates and STD’s, not same-sex marriage.)