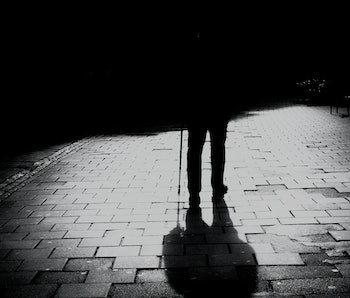 Getting old is hard, and for a lot of people, loneliness makes that process even more difficult. We all know that growing older means we’ll encounter more health problems, but researchers have now found that in the near future, more people will be aging without familial support, and this trend will lead to poorer health in old age.

In a study published October 2 in the journal Proceedings of the National Academy of Sciences, sociologists Ashton Verdery and Rachel Margolis explain that loneliness among older adult poses an increasing risk to population health. The trend they describe, in which more people grow old without children or spouses to care for them, can be explained in part by higher divorce rates and lower marriage rates across the U.S. Regardless of the causes, the trend will have a major impact on our society.

“The impending increase of kinless older adults is a potentially critical demographic trend for society as a whole, institutions that provide services for older adults, and the kinless themselves,” write the study’s authors. “We know that those who lack kin are more likely to be socially isolated, suffer poorer health, and have fewer economic resources.”

As if that wasn’t a big enough challenge, they also identified that black Americans will be disproportionately affected by this risk factor in the coming decades. In addition to experiencing higher rates of “grey divorce” — divorce during the latter years of life — black Americans are also more than twice as likely as white Americans to have a deceased spouse by age 60. Softening some of these factors, the researchers found that black Americans are slightly more likely to have living children as they get older.

Demographic differences aside, though, lower levels of kinship will pose a serious problem for aging adults across the board, say the study’s authors.

“Those without living close kin report higher rates of loneliness and experience elevated risks of chronic diseases and nursing facility placement,” they write. So not only might people grow old fewer close family ties, but this could actually put them at greater risk for lower levels of health and quality of life as they age, resulting in an earlier death.

The study’s authors conducted this research by using over 100 years of census data to run microsimulations. The process allowed researchers to observe how kinship networks are affected by different demographic factors over long periods of time.

“Demographic microsimulation works by simulating the behaviors of a hypothetical population of individual agents over time, allowing them to marry, divorce, remarry, have children, and die probabilistically at specified age–sex–state–specific rates, where states can be any category such as parity, marital status, or ethnicity,” explain the study’s authors.

While microsimulations were good for estimating the family factors described in the study, the authors acknowledge that they don’t account for the community ties that could take the place of children and spouses as people get older. Step-children and friends can be caregivers, and they’re not accounted for under this kinship model.

This doesn’t mean you need to go out and get married just because you’re afraid of dying alone. The study’s authors acknowledge that talking about this problem is an important first step toward finding positive solutions so that people can find compassionate care as they age.