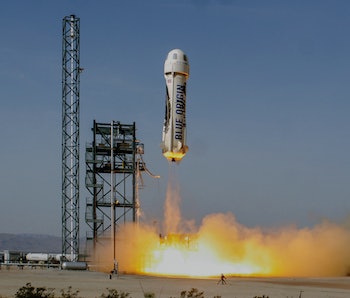 Last week, SpaceX founder Elon Musk made some big announcements about the future of his company, including plans for a crewed mission to Mars as early as 2024. Not to be outdone by its biggest competitor, Blue Origin now says it’s updated its plans on sending tourists into suborbital space.

On Thursday’s meeting of the National Space Council — which has been revived under President Trump — Blue Origin CEO Bob Smith told the panel that the company is now eyeing 2019 for its first tourist flight.

“Within the next 18 months we’re going to be launching humans into space,” Smith said, according to CNN. “These won’t be astronauts…these will be everyday citizens.”

Truthfully, this isn’t a great look for Blue Origin in its ongoing race against SpaceX. In 2016, Jeff Bezos told reporters on a press tour of Blue Origin’s Seattle facility that the company would start ferrying tourists into suborbital space by 2018. Clearly, that spaceship has long since sailed, or more accurately, failed to.

Though Smith’s recent announcement clearly seems to suggest that Blue Origin is going back on its earlier projections, the company claims it hasn’t changed its timeline at all.

“Internal dates have not shifted,” the company said in an email to CNNMoney. “We will fly humans when we’re ready, and not a moment sooner.”

Jeff Bezos has previously said that Blue Origin’s tourist trips will be only about 10 or 11 minutes long. Hopefully, everyone will have a good time unless they happen to feel sick — in that case, they’re pretty much screwed.

Who knows when Blue Origin or SpaceX will send private citizens into space. At this point, maybe they need some more competition to inspire a little progress.