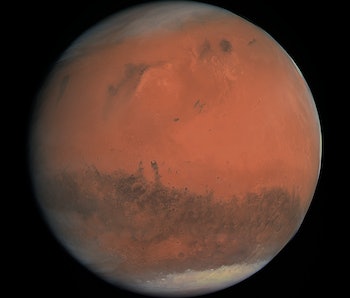 Elon Musk loves to talk about his BFR. At the IAC in Adelaide, Australia recently, the SpaceX founder revealed his plan to ferry humans to and from the red planet using the newly revealed revealed massive rocket, which would replace the company’s existing rockets after they’re “phased out.” Though Musk has no shortage of ideas about how he plans to get humans to Mars as early as 2024, he hasn’t said much about how they’ll survive once they’re there.

Future settlers will face physical hardships far more intense than anything anyone has braved on Earth, like how to create agriculture on an essentially barren planet and protect themselves from the planet’s potentially cancerous levels of radiation. But, as multiple experts tell Inverse, perhaps the greatest challenge these new Martians will face will be psychological: the haunting realization that they may never return “home,” no matter how dire their situation becomes.

It’s hard to understand the full scope of anxieties future Martians will deal with, since they will be going quite literally where no person has gone before. Extended isolation from the rest of humanity will definitely be one of the most difficult challenges.

In the past, Musk has been reticent to reply to questions about how SpaceX plans to psychologically prepare its future passengers. It’s not like people haven’t asked. In a Reddit AMA from earlier this year, multiple commenters asked Musk how he planned to address mental health concerns on another planet. He didn’t answer any of these questions, but he did offer plenty of details about the Falcon 9 boosters.

According to Mark Shelhamer, former chief scientist at NASA’s human research program, Musk’s silence around this subject could be because SpaceX simply isn’t thinking about the mental wellbeing of its future passengers — at least not for now.

“[That seems to be] the prevailing attitude of most if not all of the new-space companies,” he tells Inverse. “They are so heavily involved with building safe and effective rockets — which is plenty hard enough — that they haven’t yet given much thought to the human side of things.”

While this doesn’t mean SpaceX is totally ignoring passengers’ overall health — or what Shelhamer calls “human factors” — it would behoove the company to start considering them soon, especially since Musk still plans to send two private citizens around the moon next year. That jaunt is expected to last about a week — for some, a trip to Mars might never end.

“The overall aspects of human physiology and psychology, including medical concerns, are not high priorities at the moment,” Shelhamer added.

SpaceX and other private entities have time on their side, but not much — especially if Musk keeps setting highly ambitious deadlines. 2024 is just seven years away, after all.

Rockets aren’t the end of humanity’s Martian odyssey — they will only barely get us to the beginning of that story. If any of these companies are serious about establishing settlements on other planets, they have to start caring about the wellbeing of the people who will live in them.

To get to Mars, NASA is researching a high-tech bear den for astronaut “hibernation.” Check out this video to find out more.