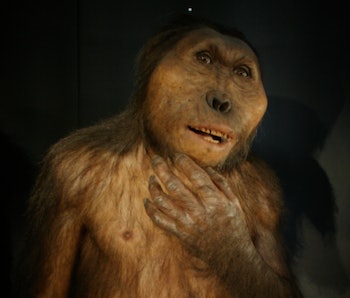 Herpes has been around for a long time. In primates, the herpes simplex viruses (which manifest in modern humans as HSV1 and HSV2) goes so far back in the evolutionary chain that it’s unknown when it even arrived.

There was a point, 7 million years ago, when human ancestors were splitting away from what would become chimpanzees, that we only carried the HSV1 virus. But somehow, a few million years later, we contracted HSV2 — the form of the virus most commonly associated with genital warts — again. So how did we manage to escape this virus and then get it again? A team of scientists from Cambridge and Oxford Brookes says that they’ve found the answer.

In a study published Sunday in the journal Virus Evolution, researchers say it’s likely that our early ancestors caught HSV2 after coming into contact with another hominin, Paranthropus boisei. Hominin is the zoological tribe within which our species belongs, and Paranthropus boise (P. Boise for short) was a fellow tribe member with a disc-shaped face, huge teeth, and small brains that homo erectus would have interacted with in Africa 1.4 to 4 million years ago.

The way that P. boisei likely contracted the herpes virus itself is pretty icky, but remember we’re dealing with a small-brained, scavenging, early human-esque hominin here. According to the researchers, P. boisei most likely contracted HSV2 through scavenging ancestral chimp meat, and the infection would have seeped in via bites or open sores. Herpes needs skin to skin contact to be passed on, and it’s incredibly common among a multitude of species.

“Herpes infect everything from humans to coral, with each species having its own specific set of viruses,” says study author Charlotte Houldcroft, a virologist from Cambridge’s Department of Archaeology. “For these viruses to jump species barriers they need a lucky genetic mutation combined with significant fluid exchange. In the case of early hominins, this means through consumption or intercourse — or possibly both.”

Based on the work done by Houldcroft and her team, it looks like P. boisei was also in the right place at the right time to transmit HSV2 back to our ancestors. Lucky us.

With the help of Simon Underdown, a human evolution researcher from Oxford Brookes, Houldcroft collected data ranging from fossil finds, to herpes DNA, to ancient African climates, and then used all the information to narrow down the probability of what species could have been hanging around with chimps, as well as homo erectus.

“Climate fluctuations over millennia caused forests and lakes to expand and contract,” says Underdown. “Layering climate data with fossil locations helped us determine the species most likely to come into contact with ancestral chimpanzees in the forests, as well as other hominins at water sources.”

Despite the fact that P. boisei turned out to be most probable hominin to connect homo erectus back to HSV2, it’s not totally their fault. Researchers say we probably got it from eating them.

If you liked this article, check out this video on how evolution is making genes linked to intelligence more scarce.