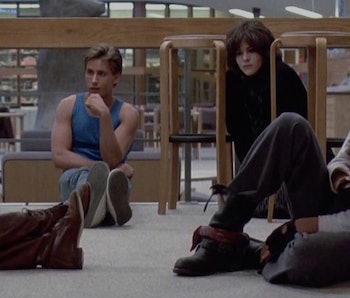 As an adult, it can be tricky to remember what you ate for lunch last Monday. But somehow, you can remember that Jimmy Eat World’s “The Middle” played at the first high school party you went to, the same party where sort of talking to that cool senior left your heart fluttering for weeks. For better or for worse, our most vivid memories are the ones we made as teenagers and young adults, and scientists are only beginning to understand why.

They know that it’s probably linked to the multitude of changes — intellectual, physical, hormonal, and social — that an individual goes through during adolescence. As Inverse explains below, the combination of changes in brain structure, the extreme emotions of the teenage brain, and societal pressure to see those years as the best of your life leads to high school memories that last a lifetime — whether you like it or not.

Memory scientists have consistently found that the strongest memories held by older adults are the ones they made between the ages of 10 and 30, a period they call the “reminiscence bump.” On graphs comparing a person’s age with the number of memories they encode at the time, studies show a clear increase during adolescence and early adulthood, bookmarked on one end by the self-explanatory “childhood amnesia” and a “period of recency,” during which a person remembers things because they just happened.

During the reminiscence bump, people retain a “disproportionate number of autobiographical memories,” wrote scientists in a 2008 paper in the journal Memory Cognition. There are multiple reasons why this might be the case.

One leading theory, known as the “identify-formation account,” argues that the cluster of events that happen at this time hold a special place in a person’s memory because they coincide with an important time of identity formation. In the Memory Cognition paper, psychologists David Rubin, Ph.D. and Jonathan Koppel, Ph.D. explain that these memories can serve as landmarks, or guiding points, for thinking about and questioning identity later on in life.

“Such events received increase encoding and retention because they are involved in solving basic life issues, are more central to related networks of events, and have their availability maintained through increased rehearsal,” they write.

An alternative way of looking at the identity-formation explanation, writes psychology fellow Alejandra Scherman, Ph.D. in a Nordic Psychology study is acknowledging that this period of self-discovery is paired with a “cultural life script.”

The reminiscence bump, Scherman writes, “is heavily influenced by the cultural life script — that is, shared expectations about the order and timing of life events in an ordinary life course.” Because there’s a cultural obsession with being a teenager, when people are actually teenagers they are cognitively prepped to pay extra attention to the things that are happening to them.

While being primed to be hyper-conscious of our teenage years has an influence on how memorable they are, the way our brains physically develop during that time plays a role as well.

In April, a team of Massachusetts Institute of Technology scientists presented an groundbreaking explanation for how humans can remember events that occur on different time scales. In a paper in Science, they reported that both short- and long-term memories form simultaneously in the brain’s hippocampus but that the long-term memories are later transferred to the brain’s cortex for more permanent storage, two weeks after they are formed. Deciding whether a memory gets filed as short-term or long-term depends on a number of factors, and other research has suggested that a teen’s brain is especially primed to store memories for life.

This is thought to be the case because adolescence is when the brain goes through changes in structure and function. In 2013, neuroscientists explained in a Trends in Cognitive Science paper that the region of the cortex involved in memory formation matures during adolescence. This maturation heightens the plasticity of the brain, which the scientists explain causes “increased opportunities for development but also in increased vulnerabilities.”

A “vulnerable” teenage brain is an especially sensitive one, and sensitive brains are more likely to store lasting memories. Scientists have showed that intense moments are more likely to be remembered because adrenal stress hormones “influence memory consolidation of emotional experiences via interactions with arousal-induced activation of noradrenergic mechanisms within the amygdala,” as the authors of Neural Plasticity and Memory: From Genes to Brain Imaging wrote.

All that is to say that, because teenage brains are already more sensitive, teenagers are will experience moments more intensely — thereby creating memories that will last longer.

Which is a good or bad thing, depending on how much you liked high school.

Have you ever wondered what effects LSD has on the brain? Check out this video to find out.