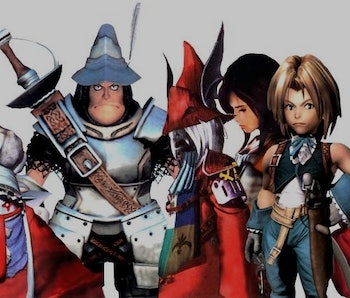 Square-Enix is bringing Final Fantasy IX — one of the series’ all-time greatest hits — to the PlayStation 4 in a new re-release of the beloved game. Fans can relive Zidane’s adventures kidnapping Princess Garnet and saving more than one world from utter destruction.

The game is available from the PlayStation Store right now and includes a slew of Trophies and achievements that are nearly impossible — like jumping rope 1,000 times. HD versions of classic cutscenes augment an already great story and auto-save is another welcome improvement. There’s also a series of “booster” features that can turn off random encounters, put the game into a high-speed mode, and even allow you to instantly master any character’s abilities.

The many improvements on this port offer a more streamlined gaming experience without the time-consuming grind to level up your characters that usually comes with a Final Fantasy game.

Most regard the ninth installment as a return to “classic” Final Fantasy form with its more fantasy-oriented aesthetic. Final Fantasy VII, VIII, and X, by comparison, leaned heavily into techno-futuristic settings with advanced technology utilized alongside magic. But Final Fantasy IX has knights, mages, a dragoon, two summoners, and four politically-divided kingdoms.

Square-Enix already released a port of Final Fantasy VII but seems to have skipped VIII entirely — at least for the PlayStation 4. It’s a shame because the eighth installment was a thrilling experience in its own right, even if almost everyone regards VI, VII, IX, and X as better.

All that’s left for you to do is go to the PlayStation Store and buy Final Fantasy IX right now.