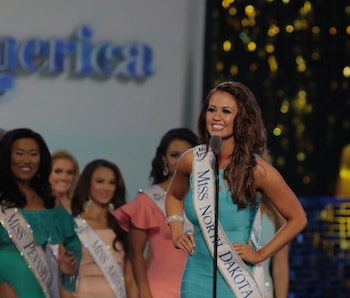 The controversial question judges asked the future Miss America during Sunday night’s pageant came at exactly the right place and time. Did President Donald Trump make the right choice by pulling out of the Paris climate accord?

As Miss North Dakota, Cara Mund, gave her carefully considered answer, Hurricane Irma drove toward Florida and Texans continued to deal with the devastation left by Hurricane Harvey. The pageant itself took place in Atlantic City, a resort town already affected by rising sea levels. Mund made it very clear that she understood climate change played a role in these natural disasters.

“It’s a bad decision,” the 23-year old Miss North Dakota responded. “There is evidence that climate change is existing and we need to be at that table.”

A graduate of Brown University with plans to attend law school, Mund told reporters after the ceremony that she stuck by her comments, regardless of whether or not the president approves.

“I wasn’t really afraid if my opinion wasn’t the opinion of my judges,” Mund said. “Miss America needs to have an opinion and she needs to know what’s happening in the current climate.”

Mund, who told the Associated Press that she hopes to become the first female governor of North Dakota, also confidently commented on other debated political and science issues in a post-win interview.

“It’s important to have a woman’s perspective,” Mund said, arguing that more women should be elected to all levels of government. “In health care and on reproductive rights, it’s predominantly men making those decisions.”

Trump, for his part, hasn’t yet commented on Mund’s criticism of his decision. The Miss America pageant is the direct competitor of the Miss USA pageant, which Trump formerly controlled as the owner of the Miss Universe competition.