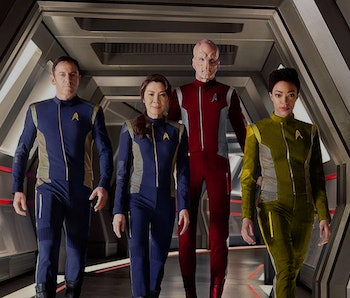 Because no one on Star Trek: Discovery is wearing a red Starfleet uniform, it will be so hard to predict who will die in any given episode. But, as the series goes on, it turns out the classic Star Trek color-coding system could be introduced…gradually.

On September 3, at Fan Expo in Canada, a panel of designers working on Star Trek: Discovery revealed the show won’t totally be stuck in blue-tones forever. “This is slightly blue-y,” Lead Motion Graphic Designer Timothy Peel said, according to Trek Movie. “They are sort of restricting all the color schemes and they will slowly advance and become more colorful as we get closer to The Original Series, and for other reasons I can’t repeat.”

Peel also mentioned that much of the look and design of Discovery comes as a natural outgrowth of the work done by Michael Okuda, the graphic designer who worked on all the Trek series from The Next Generation through Enterprise. This comment dovetails with what Okuda told Inverse in 2016 about giving certain files from Enterprise to the design team on Discovery.

What does it all mean? Will Discovery eventually not only incorporate more colorful design on the starships but maybe have the multi-colored uniforms of the original series, too? Trek novelist David Mack told Inverse that the blue-uniforms on Discovery seem like an evolution from Enterprise, which now checks with Peel’s insight about the design of the ships. So, how does that make the leap to the more retro look of “The Cage” and the rest of the original series? In other words, will Discovery eventually evolve to let Commander Michael Burnham rock the classic command-gold of the original Trek?

For what it’s worth, a close inspection of the big Comic-Con trailer for Discovery makes it look like that in certain scenes, she might be wearing a gold tunic already.

If this gold-tunic scene is from an episode later in the season for Discovery, then perhaps Peel’s comments about “reasons” that he “can’t repeat” will make a lot more sense.