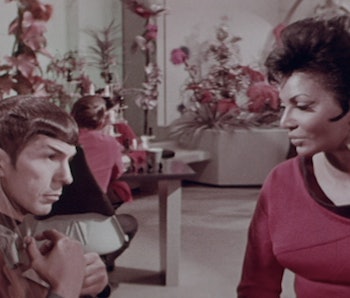 For a franchise set in the far-future, Star Trek has spent the majority of 2016 focused on its own past. The 50th anniversary of the original series has brought a lot of wistful retrospectives and some no-holds-barred recollections. It’s all about living long, and looking back on how you’ve prospered.

The Roddenberry Vault, released this week, rounds out the Trek nostalgia with a set of Blu-rays which are aimed at the most hardcore Trekkies. The husband and wife team Denise and Michael Okuda, long-time scenic artists on the Trek, sifted through old film canisters from the original ‘60s show in search of lost footage. What they found is interesting for sure, but the reasons why so many fans will lose it over this minutiae totally explains the persistence of Star Trek fandom in general.

The Okudas’ professional work on Star Trek helped define the way Star Trek looks. Michael Okuda is responsible for the overall graphic design of pretty much every computer interface seen on a starship, from 1986’s Star Trek: The Voyage Home all the way through Star Trek: The Next Generation and Enterprise, which ended 19 years later. Denise Okud was the scenic art director on Star Trek: Deep Space Nine, Star Trek: Voyager, and Enterprise. In 2006, both Okudas worked on the remastered version of Star Trek: The Original Series, which not only cleaned up the old footage from the show, but also inserted brand new digital effects.

Ironically, The Roddenberry Vault is the exact opposite of the Okudas’ efforts on the remastered original Star Trek. Instead of cleaning up damaged footage, and inserting sleek special effects to update a cheesy 1960s sci-fi show, The Roddenberry Vault revels in showing off its grainy film footage and incomplete audio segments, and generally reminds the viewer that the ‘60s Star Trek is very old. The process of combing through old Trek footage started nine years ago, around the time work remastering the original series was just about complete.

“We were called in by Rod Roddenberry [the son of Star Trek’s creator, Gene Roddenberry] and saw rows and rows of film canisters,” Denise Okuda told Inverse. “After seeing some of the footage our jaws dropped. This was the holy grail. This was lost footage, we were never supposed to see this … it should have gone in the trash.”

The discs are mostly comprised of a multi-part documentary, which contextualizes the lost footage in terms of both historical relevance and Trekkie relevance. Directed by Roger Lay Jr., these segments contain tiny bits of trivia, like the fact that actor Ben Stiller supposedly owns the original lizard-head for the Gorn from the episode “Arena.” But also shows deleted footage of Mr. Sulu talking about “old fu manchu movies,” one of many failed attempts the original series made at trying to be progressive. As Michael Okuda says in the documentary, the producers were “right” to cut this particular footage, and yet, here it is for fans to examine and think about.

While the viewer is invited to draw their own conclusions, a myriad of talking heads including Bill Nye and William Shatner help to shape certain intended emotional takeaways. So on the one hand, the footage is the holy grail for Trek completists. On the other hand, the talking heads and insights from the Okudas themselves are often times more interesting than the footage itself.

“I wouldn’t say there was a single major surprise [in the footage],” Michael Okuda told Inverse, “but there were lovely discoveries. Some of these discoveries include more footage of Captain Kirk’s nephew Peter Kirk in “Operation: Annihilate!,” and a deleted ending of the episode “Who Mourns for Adonais?” But thinking about how the original Star Trek was even made at all was the biggest emotional takeaway from footage. “Look at what these people had to work with,” he said. “There are so many tools that we has filmmakers that they didn’t have … and yet they were able to put together this extraordinary production, which largely still holds up today.”

Almost completely by accident, The Roddenberry Vault presents a weird comment not only in Star Trek fandom, but the way in which serious pop culture documentaries are almost universally handled now. For someone who has never watched a documentary about Star Trek, The Roddenberry Vault will be very engaging, but for the hardcore fan — who is almost certainly the target audience — the social and political takeaways about Star Trek are very familiar.

It’s similar to Ron Howard’s recently released Beatles documentary, only instead of newly discovered concert footage of the Fab Four, we get to see an outtake from “Space Seed” in which Bones tells Khan that he “owes him” for saving Khan’s life in the first place. It doesn’t really change much, just adds a new angle onto a complex pop-historical event, which has already been examined from hundreds of angles.

The Okudas will not be making cool computer graphics for the new show, Star Trek: Discovery, though they did send some their “old files from Enterprise” to the people working on the new show. “We are very excited about seeing it,” Denise Okuda said. “We’ll be just like you guys, we’ll able to watch Star Trek fresh and anew and are really looking forward to it.”

Though the Okudas have worked on all of Star Trek extensively, and Michael has “worked on more Star Trek than anybody but Gene Roddenberry..” Denise Okuda told Inverse that going through this old footage was “the pinnacle,” of anything they’ve ever done. “It was a dream come true,” she said. “Our goal was to squeeze as much as possible into these discs.”

More than anything, these statements, and the existence of The Roddenberry Vault in specific, prove something that Trekkies have known for a long time: Star Trek’s longevity might not have anything to do with its content. Instead, its unique because for a very long time now, its fans aren’t just the people watching the documentaries. In Star Trek, the hardcore fandom exists on both sides of that production.