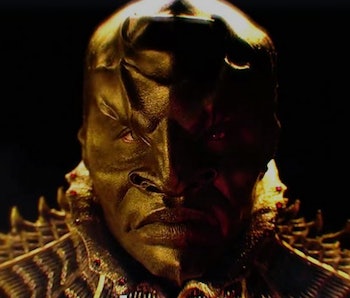 Perhaps today is not a good day to die! The rowdy Klingon Empire is coming to Star Trek: Discovery, and this time, not all of them will be talking about fighting to the death before losing their honor. In fact, some Klingons, specifically T’Kuvma, are actually telling the Federation that they hope everyone on the Final Frontier can maybe just hug it out.

On Wednesday, a new trailer for Discovery featured the Klingon leader — played by Chris Obi — saying “we come in…peace.” This echoes a previous trailer in which Starfleet officer Michael Burnham also said: “we come in peace.” For a TV show with so many explosions in its trailers, humans, and Klingons sure are talking about peace a lot.

As hardcore Trekkies know, the history of the Klingon Empire is replete with internal struggles. Even when the Klingon Empire wasn’t actively at war with anyone in the 24th century of The Next Generation, there was a giant icivil war between various big Houses. Then, a few years later, when the Empire was infiltrated by shapeshifters, there were, even more, domestic problems with the Klingons on Deep Space Nine. The point is, Klingons often disagree with each other almost as much as they like fighting other species. In Star Trek VI: The Undiscovered Country, angry Klingons even conspired with hawkish humans to assassinate their own President in an attempt to preserve the status quo of a cold war.

What all this means for Discovery is unclear. But, despite creating a race of aliens that is usually characterized as aggressive and blood-thirsty, Star Trek has done a good job at subverting its own fictional stereotypes. Some Klingons probably do want to go to war with Starfleet in Discovery, while others — perhaps T’Kuvma —want to make sure the Empire isn’t needlessly fighting with the United Federation of Planets.

Who knows, maybe Discovery will end up having moments in which Klingons slap Starfleet officers on the back while everyone is laughing at an evil alien entity in the sky? Strange things, exactly like that, have in fact happened on Star Trek, before.

Then again, in the newest trailer released on Thursday, it definitely looks like Klingon ships are shooting up the USS Shenzhou. So, maybe any Federation-Klingon coziness will have to wait.