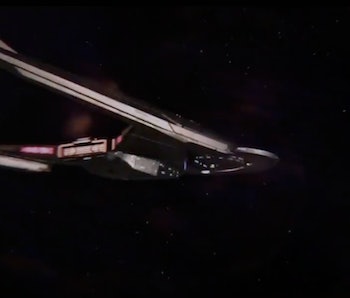 Captain Georgiou (Michelle Yeoh) said in the first trailer for Star Trek: Discovery: “Starfleet doesn’t fire first!” And despite its war-centric plot, it looks like the latest Trek will still be all about peace. Two new trailers for Star Trek: Discovery double-down on the concepts of peace and unity being central to the themes of the new show.

On Tuesday and Wednesday, the official Discovery Twitter account released two new trailers. Though little new footage was revealed, there was a glimpse of Captain Lorca (Jason Issacs) welcoming Michael Burnham (Sonequea Martin-Green) to the Discovery, as well a stirring new monologue from Lt. Commander Burnham herself.

“We come in come from a tradition of tolerance, freedom, and justice,” Burnham says. “From a legacy of fearless exploration, of allies who respect each other’s differences, honor, and civilizations. We come on a mission to understand our world and ourselves better. We come…in peace.”

While the new speech from Burnham contains tons of meta-Star Trek references like “civilizations” and “fearless exploration,” it also is a strong reminder of just how different this sci-fi franchise is in contrast with so many others. Despite whatever the Klingons may or may not have done to Burnham’s family, this show will still be about finding peace.

Figuring out how Discovery will forge peace with the Klingons is still part of the mystery though. According to the old Trek timeline, the conflict with the Klingons turns into a cold war that lasts for several decades. Is Discovery changing all that?