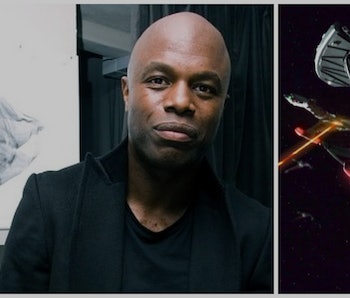 The leader of the entire Klingon Empire may be a major character on Star Trek: Discovery. Actor Chris Obi has teased that he is the “king” or “chancellor” of all the Klingons in the new upcoming series.

As reported by TrekMovie on Tuesday, Discovery actor Chris Obi was called “the King of Klingons,” by one of Discovery’s writers, Aaron Harberts, on Twitter on Monday. Obi responded on Twitter saying he was maybe “the king” or “chancellor.” Previous reports from CBS have indicated that Chris Obi’s Klingon character, T’Kuvma, is trying to unite the houses of Kronos. It’s unclear if this means he’s trying to unite the Klingons in opposition to Starfleet or trying to bring peace.

In the overall Star Trek canon, political leaders of the Klingon Empire have been depicted before. Robert O’Reilly played the menacing Klingon named Gowron in both The Next Generation and Deep Space Nine, while David Warner played the peace-seeking Chancellor Gorkon in Star Trek VI: The Undiscovered Country. Notably, both Gorkon and Gowron were eventually killed. Hopefully, Chris Obi’s T’Kuvma fairs better.

As of Friday, Obi has deepened the Klingon chancellor mystery by tweeting “To be or not to be the king of all Klingons! That is the question!” This is an obvious reference to the Klingon General Chang (Christopher Plummer) quoting from Hamlet constantly in Star Trek: VI.

Star Trek: Discovery hits CBS All Access sometime this fall. Here’s everything we know about it.