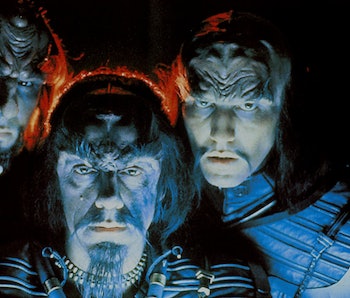 Do a grand total of three Klingons constitute a swarm? If so, Star Trek: Discovery is about to have way more Klingons featured in its regular cast then any other Star Trek series to date. But these Klingons are probably not serving as members the crew of the Federation starship, USS Discovery. Instead, they might have their own mission.

According to The Hollywood Reporter, three actors have been added to the cast of Discovery including Chris Obi, Shazad Latif, and Mary Chieffo. They are all playing Klingons. Obi will play T’Kuvma, Latif is Kol, and Chieffo is playing a character called L’Rell. All three Klingons will be serving aboard an as-yet-unnamed Klingon vessel. The press release also mentions that T’Kuvma is hoping to “unite the Klingon houses.” This detail could mean a lot of different things, mostly because wars between the big “houses” on the Klingon homeworld Kronos have created huge plotlines on Star Trek before.

But, Discovery takes place a little over a century before Worf’s time, and almost three decades before the Federation peace accords begin at Khitomer in Star Trek VI: The Undiscovered Country. So, what is the Klingon up to at this point? And why are its houses warring?

If Discovery does end up being primarily about secret peace missions between the Klingons and the Federation, it is possible that T’Kuvma is all about trying to get all his fellow Klingons to agree on one specific policy regarding the Federation. Perhaps T’Kuvma is a pacifist Klingon, trying to convince his warlike world to change their ways.

Either way, with this many Klingons in the cast, it’s looking like Star Trek’s politics, specifically with the Klingons, will almost certainly take center stage.

More like this
Culture
Jan. 18, 2023
Your science fiction education begins with Babylon 5
By Ryan Britt
Culture
Jan. 25, 2023
30 years later, Star Trek is about to pay off a massive villain comeback
By Ryan Britt
Entertainment
7 hours ago
Last of Us Episode 3 release date, time, and trailer for HBO's zombie show
By Claire Fox
LEARN SOMETHING NEW EVERY DAY.
Related Tags
Share: