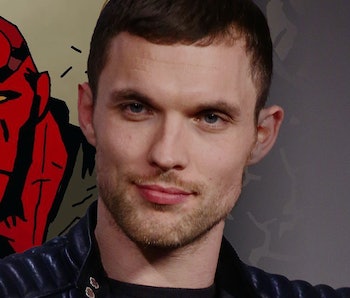 On Monday afternoon, Skrein announced on Twitter that he has left Hellboy, Neil Marshall’s upcoming reboot movie about the Dark Horse Comics character. “I accepted the role unaware that the character in the original comics was of mixed Asian heritage,” writes Skrein. “There has been intense conversation and understandable upset since that announcement, and I must do what I feel is right.

“It is clear that representing the character in a culturally accurate way holds significance for people, and that to neglect this responsibility would continue a worrying tendency to obscure ethnic minority stories and voices in the Arts. I feel it is important to honour and respect that. Therefore I have decided to step down so the role can be cast appropriately,” he added.

When Skrein, who descends from Jewish-Austrian and English heritage, joined the Hellboy reboot, the ongoing whitewashing discussion totally eclipsed the film. Skrein, Hellboy creator Mike Mignola, and even the film’s casting director Christa Campbell — whose statement that the right person was cast for the role got her in hot water — were bombarded with tweets threatening to boycott the film. (Campbell has since deleted her Twitter page.) After Skrein posted his announcement, Mignola commended the actor.

Skrein is one of the first actors prominently involved in “whitewashed” projects to exit their roles. Scarlett Johansson (Ghost in the Shell), Matt Damon (The Great Wall), Tilda Swinton (Doctor Strange), Finn Jones (Iron Fist), and Natt Wolff (Death Note) all stayed on their respective films and shows, which more or less became overshadowed by the topic. At this point, it can only benefit Skrein than hurt him to leave a project in order to encourage more diverse casting.

In the Hellboy comics, Ben Daimio is a Japanese-American soldier whose family history is heavily rooted in fictional eastern mythology. Ben’s grandfather served in the Imperial Japanese Army but fell in love with a witch called the Crimson Lotus. Ben can also turn into a jaguar.

There is not yet a release date for Hellboy.