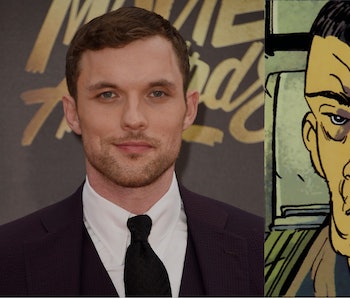 The Hellboy reboot, previously titled Hellboy: Rise of the Blood Queen, is coming together with an ensemble cast that includes David Harbour (Stranger Things), Ian McShane, and Milla Jovovich. Now, Deadpool star Ed Skrein has joined the cast as Major Ben Daimio — who is Japanese-American in the comics — in what may be yet another episode of Hollywood white-washing. Oh boy.

On Monday afternoon, The Hollywood Reporter wrote that Skrein nabbed the role of Daimio, a U.S. Marine turned consultant for the Bureau for Paranormal Research and Defense, the same department that employs and houses Hellboy. Besides his facial scars from a mission in Bolivia — not to mention the ability to morph into a human jaguar beast — Daimio is also significant because of his family history. His grandmother was a witch called the Crimson Lotus, while his granddad was an assassin for the Imperial Japanese army during World War II.

With a backstory intrinsically tied to east Asian history and horror, it’s curious why English actor (and rapper, apparently) Skrein was cast as Ben Daimo when white-washing has been kind of a big deal in Hollywood movies. Ghost in the Shell and Iron Fist garnered criticism for continuing the trend, and now with Hellboy, the problem seems never-ending.

Hellboy does not have a release date yet.