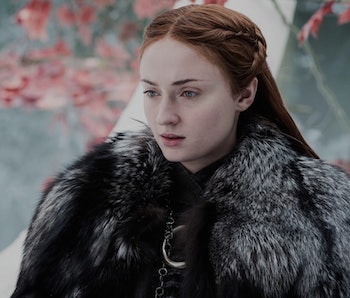 Prophecies are tricky in Game of Thrones since characters constantly misinterpret them. Melisandre used to think Stannis was the prince that was promised until he died, and she smoothly transitioned to Jon Snow. A new theory says that Daenerys, and many fans, have misinterpreted another key prophecy — and its true meaning links Daenerys to the Starks.

The prophecy came via Quaithe, a forgotten Game of Thrones character who appears in Season 2 when Daenerys is stuck in Qarth. She hails from the mysterious Shadow Lands (the origin of the Azor Ahai legend) and is notable for wearing a mask. In the show, she mostly gives Jorah an ominous warning, but in the books she tells Daenerys this intriguing riddle:

At the time, Daenerys thinks that “passing beneath the shadow” means visiting the mysterious land of Asshai, which is near the Shadow Lands. But George R. R. Martin has already said the story will not venture there “onscreen,” which leaves many fans puzzled about this prophecy.

One fan on Reddit, however, suggests that it doesn’t apply to Daenerys at all, but the Starks. The first part describes Sansa, who went south and came of age in the viper pit of King’s Landing and the Vale in order to obtain the smarts to win back the north. Arya traveled east to Braavos in order to find her way back to the west. Bran has hopped around in time, going back in order to go forward. And Jon Snow has passed beneath the shadow of death.

The question remains, why would Daenerys be the one to hear this prophecy if it’s about the Starks? Since the title of the Season 7 finale is “The Dragon and the Wolf,” it hints that House Stark and House Targaryen are about to be linked. We already know the houses are linked in the past, in the form of Rhaegar Targaryen and Lyanna Stark.

Perhaps Daenerys and the Starks have key roles to play in each other’s futures, too.