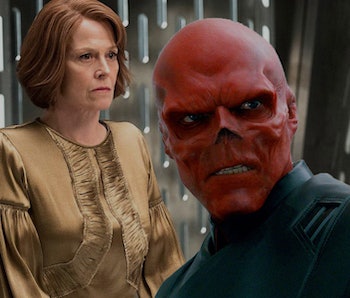 Sure, the relationship between Marvel’s film and TV products is tenuous at best, but this begs a question that we’ll surely never get the answer to. Did Hydra and the Hand know about each other while they were both secretly manipulating the Marvel Cinematic Universe?

As The Defenders and Daredevil and Iron Fist before it laid out, the Hand was founded centuries ago when five members of the Order of the Crane Mother monks of K’un-Lun broke faith with the rest of their ranks and used secrets of Chi to cheat death. Alexandra Reid, Madame Gao, Bakuto, Murakami, and Sowande would go on to become the Five Fingers of the Hand, and after returning to their respective homelands, established a criminal empire. Using the bones of a dead dragon, the Five Fingers extended their lives and used their vast resources to manipulate entire companies, cities, and countries in order to further their goal of final immortality.

Simultaneously, Hydra was out there in the world trying to use its vast resources and influence secretly achieve its ends. If you just watched the MCU movies, you’d be forgiven for thinking that the Hand is much older than Hydra, which only really began in World War II, but Agents of S.H.I.E.L.D. reveals that the organization actually began thousands of years ago. Because Hydra’s backstory has to do with the Inhumans, it’s horrendously complicated, but the gist is that there was an Inhuman named Hive who was so powerful he was banished to another planet. On Earth, though, his cultish followers continued to worship him.

The cult changed over the centuries, but the modern version of Hydra (and the first iteration to officially use the Hydra name) was that Nazi spin-off in WWII under the guidance of Johann Schmid, aka the Red Skull. Following his defeat at the hands of Captain America, Hydra went underground. When S.H.I.E.L.D. recruited Arnim Zola after the war, he rebuilt Hydra like a secret tumor inside the very organization that sought out to defeat it. Hydra infiltrated all levels of government around the world, and it was only thanks to Captain America (again) and the Avengers that they were defeated.

In the comics, the Hand and Hydra had their dalliances throughout history, as recounted in the Secret Warriors series in 2009. They weren’t exactly friends, but they intertwined on occasion and certainly knew about the other group. In the MCU, which is mercifully less complex than the comics universe, there’s no indication that Hydra had any knowledge of the Hand, or vice versa.

As with almost all plot holes in the in the MCU, the real answer for why there were two independent, hundred-year-old secret organizations operating in total ignorance of each other is that it wasn’t important to the overall plot. But, there’s another way to look at it from an in-universe if you’ll play along.

We don’t know for sure that Hydra and the Hand were 100 percent ignorant of each other, just that, as far as we know, they never interacted. What if that’s because Hydra was actually a much bigger deal than the Hand ever was? It’s older, more powerful, and had much more expansive goals than the Hand, whose M.O. mainly boiled down to “keep five very old people alive forever.”

Captain America: The Winter Soldier showed that Hydra, using S.H.I.E.L.D.’s resources, was able to identify all sorts of important and potentially powerful people. They may have known about the Hand and opted not to interfere with them (for the time being, at least), but it’s much harder to accept that the Hand would know about Hydra even while S.H.I.E.L.D. didn’t.

However the Hand and Hydra managed to stay in their own lanes, it’s a good thing that they did. If the two evil orgs had teamed up, that might’ve meant that the Defenders and the Avengers would’ve had to cross over. And, well, it certainly seems like that’s never really going to happen.