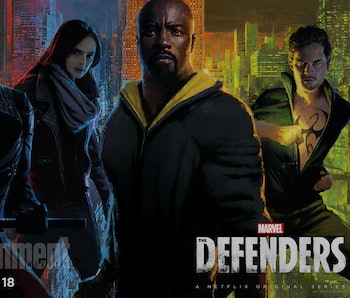 Netflix’s Marvel shows have killed off characters before, but the stakes were never higher than in The Defenders, the miniseries that brought Daredevil, Jessica Jones, Luke Cage, and Iron Fist together. And, for a little bit, it seemed that The Defenders had killed off one of its main heroes. But, right before the end credits, we find them in a strange new place. Where are they?

This post contains massive spoilers for Season 1 of The Defenders. Seriously, read ahead at your own risk.

In Episode 8 of the series, Daredevil, Luke, and Jessica head to Midland Circle in order to put a stop to the Hand forever and rescue Danny Rand from their clutches. As they descend deep into the massive pit in the center of the building, Claire Temple and Colleen Wing plant explosives on the ground floor, hoping to bring the entire building down on top of the Hand.

They’re successful at planting the explosive (although when Misty Knight comes in to help, she loses an arm, just like in the comics), and the Defenders are able to best the Hand in combat, rescuing Danny. However, when it’s time to go, Daredevil stays behind. He wants to try to snap Elektra out of her trance. They duel, and it’s only when the entire building comes down on top of them that it seems like Elektra’s herself again.

It’s too late though, and they’re buried under tons of rubble. All of Matt’s friends on the surface presume that he’s dead, since it’s been days since the incident. There’s even a cool fakeout where it looks like Daredevil’s on the prowl, but it’s actually Iron Fist, taking up the Devil of Hell’s Kitchen’s responsibilities (and signature pose).

Then, we cut to Matt laying on a spartan bed underneath a crucifix. He’s looking pretty battered up, and there’s a nun sitting at the foot of the bed. As he begins to stir, she speaks.

It’s unclear how closely Daredevil Season 3 will adhere to the comics, but in the Frank Miller-penned comics arc she made her debut in during the mid-‘80s, we learn that she had Matt when she was young. But, she was suffering postpartum depression and mental illness, and at one point attempted to assault her baby. For the sake of her husband and son, Maggie fled, and the church took her in, and she became a nun.

Later in life, she met her now-adult son and, after some time, became a part of his life. One of their first big adventures together involved Maggie caring for a baby who may have been the antichrist? Comics, y’all.

In the first season of Netflix’s Daredevil, Maggie has been mentioned twice. First, her ex-husband Jack Murdock calls her and leaves a voicemail the night before he’s killed to ask her to take care of their son when he’s gone. Then in Episode 7, during a flashback to Matt’s first meeting with Stick, the blind sensei asks a nun if Matt’s mother is dead. “That is another story,” the nun replies.

Evidently, we’ll learn about that story in Season 3 of Daredevil which will premiere in 2018 at the earliest. While we’re at it, maybe we’ll learn how a nun managed to rescue Daredevil from underneath dozens of stories of rubble.

The Defenders is currently streaming on Netflix.